Invisible and exploited in Kazakhstan: New Report Sheds Light on the Plight of Kyrgyz Migrant Workers and Their Family Members 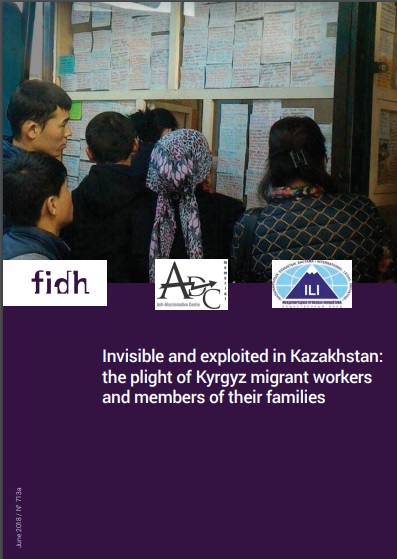 Hundreds of thousands of men, women and children from Kyrgyzstan and neighbouring Central Asian states are forced to migrate to Kazakhstan in search of work. These individuals often fall victim to forced labour, unsafe and unsanitary working conditions, v
iolations of the rights to maternity and childhood, as well as arbitrary arrests and deportations. FIDH and its partners have documented the plight of Kyrgyz migrants, in a report released today.

In recent years, the economic growth of Kazakhstan has transformed it from a sending to a receiving state of labour migrants, the vast majority of them coming from Central Asia. This trend has been aided by tougher migration regulation by Russia, making Kazakhstan a country of destination for more than a million of labour migrants from neighbouring countries.

Based on findings of a series of missions carried out from September to November 2017 in Kyrgyzstan and Kazakhstan, the report points to pervasive corruption within migration police services and increased discrimination in Kazakh society against migrants leading to their inability to formalize their presence on the territory of Kazakhstan. Because of their undocumented legal status in Kazakhstan, migrants are often exploited by employers and intermediaries, who force migrants to work long hours and without pay, withhold the migrants’ passports, restrict their freedom of movement and medical access, and quarter them in squalid conditions. A large number of Kyrgyz migrants have been held in slavery, arbitrarily detained by the authorities and deported.

"The inability of labour migrants to obtain a “regulated status” in the country of destination often leaves them at the mercy of their traffickers, employers or Kazakh authorities, who often treat migrants, including women and children, as nothing short of slaves. States must do a better job of protecting these individuals and offer more resources to civil society representatives working on these issues." - Tolekan Ismailova, FIDH Vice-President and President of human rights movement "Bir Duino Kyrgyzstan"

During its missions, the delegation met with migrant workers themselves, representatives of trade unions, non-governmental organisations and governments in order to analyse the situation of migrant workers both in the country of departure and arrival. Our report formulates recommendations to national authorities and the International Labour Organisation (ILO) with the view to increasing their protection of labour migrants.

"The existence of cases of human trafficking and slavery involving migrants is well known to the authorities and international intergovernmental organisations. However, no meaningful efforts have been conducted in coordination to protect Kyrgyz migrants and give them an access to an effective remedy" - Aina Shormanbayeva, President of International Legal Initiative, Kazakhstan

By ratifying the ILO conventions, Kazakhstan has agreed to guarantee certain labour rights for workers, including migrants. These international obligations remain unfulfilled.