Kazakhstan Doing Everything To Keep Zhanaozen Activists Away From Proposed Rally 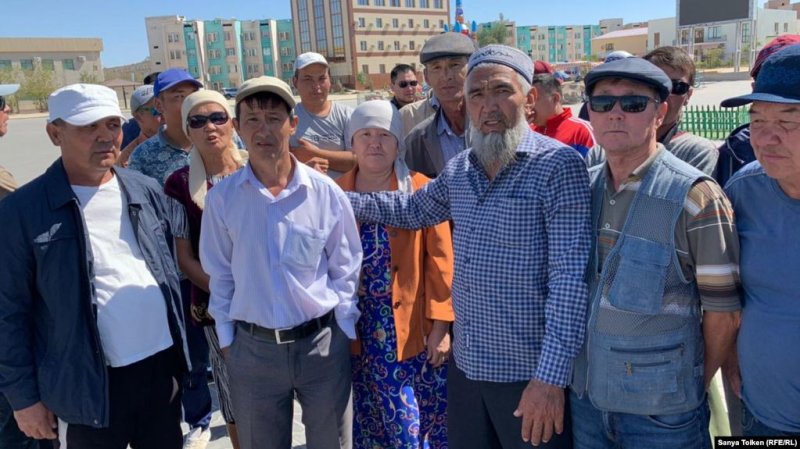 Following a wave of antigovernment protests across Kazakhstan earlier this month, activists from the volatile city of Zhanaozen say authorities are taking extraordinary measures to prevent them from attending another rally.

While no public announcement was made, workers and activists in Zhanaozen and other cities have implied that they are considering holding new protests on September 21.

But a stern warning was issued on the eve of those possible demonstrations or at any called for by exiled Kazakh opposition leader Mukhtar Ablyazov on the same day in Nur-Sultan or Almaty, the country's two largest cities.

"Destructive forces are...provoking a threat to social security by trying to incite social and ethnic discord," said Deputy Prosecutor-General Berik Asylov in a statement on September 20. It called on Kazakhs "to strictly follow laws, stay away from provocations, and abstain from taking part in illegal actions and activities by organizations banned on our country's territory."

Kazakh officials have resorted to other means in trying to keep known activists from any of the proposed rallies, as at least 50 people have been detained and sentenced to either 15 days in jail or given fines.

Additionally, two leading activists from Zhanaozen, Nurlybek Nurgaliev and Muratbai Zhumagaliev, were sent to training courses in the southeastern city of Almaty on September 12.

The activists, both of whom work for the Ozenmunaigaz company, were expected to return home after one week, but the courses were unexpectedly prolonged for another six days.

"Our classes were supposed to end on September 18 but they were extended until September 23. We think the reason is to prevent us from returning to Zhanaozen [in time for a rally]," Nurgaliev said.

Nurgaliev added that the deputy head of the company has traveled with them to Almaty.

Nurgaliev and Zhumagaliev are outspoken campaigners for the rights of workers in Zhanaozen and they often raise social issues, such as low wages and widespread unemployment.

Both of them took part in Zhanaozen oil workers' strikes in 2011 when police shot dead at least 16 people while trying to disperse the protesters.

Nurgaliev was wounded in that shooting. Zhumagaliev was sentenced to a suspended prison term for taking part in unsanctioned protests.

The latest wave of demonstrations this month started with a rally in Zhanaozen on September 2 and quickly spread to other Kazakh cities. The demonstration lasted for several days.

Protesters demanded that President Qasym-Zhomart Toqaev scrap his trip to China amid concerns over what they called growing Chinese influence in resource-rich Kazakhstan.

Toqaev went ahead with the trip despite the rallies while dozens of people were sentenced to two-week detentions for taking part in unsanctioned demonstrations.

Zhanaozen resident Kulmurat Sultanbaev, who took part in the original protests, says he was summoned to police on September 17.

"They told me to sign a paper promising that I won't attend a rally on September 21. I refused to sign. If there will be a rally, I'll take part in it. I told them that this is my position," Sultanbaev said.

Several other Zhanaozen protesters say that police have summoned them for questioning.

Zhanaozen police did not reply to RFE/RL's Kazakh Service's attempts to contact them.

Another employee in the Ozenmunaigaz company, Sholpan Otekeeva, said she was being "invited" to a workshop in the neighboring Atyrau region.

The company officials, however, insist that the seminars and workshops are taking place at the initiative of national trade unions and were not scheduled to coincide with any planned rallies.

"We wanted to postpone these trainings until a later date, but with the trade unions we are conducting labor code and labor safety training for 140 unit managers," said Adil Suyeubai, the head of the public relations department at Ozenmunaigaz.

"It has nothing to do with politics," he added.

Kazakhstan has vast lands and huge energy reserves, but much of the country's 18 million population struggles financially.