Month under sanctions: How the lives of migrants from Kyrgyzstan changed 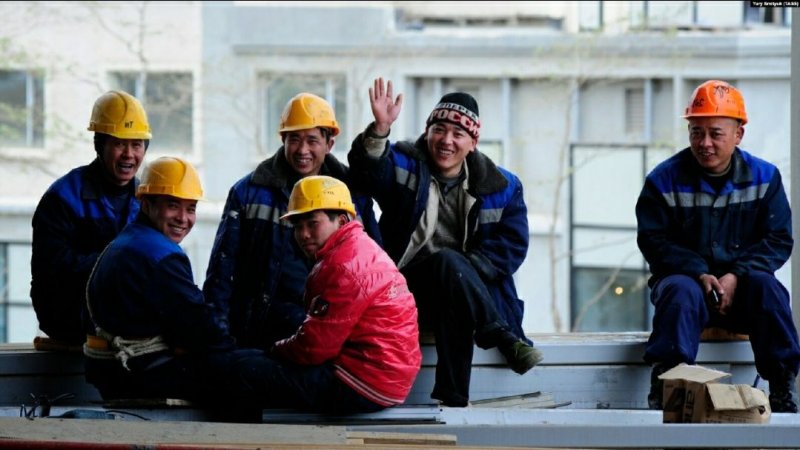 Despite the reduction in the number of jobs in Russia and depreciation of the ruble, the Cabinet of Ministers of Kyrgyzstan does not expect a mass return of compatriots. They believe that even if they do return, it will not be for long, as it was the case during the lockdown.

The Minister of Economy Daniyar Amangeldiev is sure that Kyrgyz nationals, who were laid off, will find other jobs. If not, the Cabinet will try to redirect them to other countries, as there are few vacancies in Kyrgyzstan.

«If all migrants return, we will not be able to provide them with jobs. Negotiations are underway with Korea and Turkey to ease the visa regime,» he told.

24.kg news agency asked compatriots what difficulties they are currently facing and what they intend to do.

Impact of sanctions is inevitable

Insan-Leylek Foundation conducted a survey among migrants in Moscow. At least 95 percent of the respondents said they had felt the effects of sanctions. About 64 percent noted that they have faced financial difficulties since the beginning of March, 40 percent intend to return home, and 77 percent hope that the war will end soon and the sanctions will be lifted.

The head of the Foundation Gulnara Derbishova notes that it was the areas where migrants worked that suffered over the past month: taxi service, courier service, catering and sales. Those working in the sectors were left without earnings.

«This is accompanied by mass layoffs and vacations without pay. When hiring, priority is given to Russian citizens. There are cases when people are forced to work for half of their salaries. In addition, fraudulent companies have become more active,» Gulnara Derbishova told.

Everything is the same in the regions

Migrants in the regions of Russia say their lives have remained the same, except for the mood in society.

«We have felt the changes of course: prices are going up. But in the city of Krasnoyarsk, where we live, there is not much tension,» Zhyldyz Kamchybekova said.

Food prices are rising in all regions of Russia. Each trip to the store now costs twice as much.

«There is good social support in Tyumen, everyone receives payments. Payment for meals remained the same in schools and kindergartens,» Kanzada Smanova, leader of a Kyrgyz diaspora in Tyumen, told.

Among migrant entrepreneurs, it’s mostly clothing retailers who complain in the regions. They state a decrease in trade volumes. But those who deal with food are doing well.

«There are no layoffs in Tyumen yet. Everyone works at their places. There were complaints about non-payment of wages but we have encountered such problems before. It is quiet in the region, there have been no rallies either,» Kanzada Smanova said.

Growth of unemployment in Moscow

Migrants living in Moscow immediately felt the effects of the sanctions. Ravshan Teshebaev, 60, who works as a janitor at McDonald’s, was left without job.

«There were five or six other Kyrgyz working at the place where I worked. One woman was a cleaner, young guys were waiters. Our restaurant closed on March 14. We hadn’t received our last salary yet. But they said we would definitely get it,» the man told.

Ravshan Teshebaev is confused. He is pondering whether to look for a new job or return home.

«The ruble fell and expenses increased; I haven’t sent any money to Kyrgyzstan since February. I don’t know if it’s worth staying here,» he said.

Number of job search ads in the groups of compatriots in social media and instant messengers has increased. Some are looking for a new job, some — for extra income.

«More compatriots come to me in search of work. I do not know where the layoffs are, but I have not noticed such mass layoffs in the catering industry. Some people are looking for additional work because the costs have increased,» Barat Abduvakhapov said.

He himself has a lot of work now. After some fast food chains closed, the workload on other fast food outlets increased. For example, the pan-Asian cafe where Barat works has more clients.

«We have more orders. Perhaps, this is still due to the closure of McDonald’s, KFC and others,» he said.

Kommersant reported that about 40 percent of construction companies in Russia have decided to freeze their projects indefinitely because of rising prices for building materials.

Representatives of the Kyrgyz diaspora, however, hope that construction companies will finish the projects they have started, since money has already been invested in them, and migrants will be provided with jobs for the time being.

«Closing organizations, trade and catering enterprises declare preservation of wages until a certain time. We hope that during this time there will be an opportunity to find a job in skills and abilities. As the saying goes, a holy place is never empty, and our specialists who are in demand will find employment,» Raim Attokurov, Honorary Chairman of the Council of Kyrgyz diaspora in Moscow, said.

It is expensive to live

Food prices have risen in Moscow. Some goods, like in Bishkek, are in short supply.

«There is no sugar. The shelves are empty. Taking advantage of the moment, they started selling expensive cane sugar, which no one bought before. Prices are constantly rising. Last week 700 grams of buckwheat cost 89 rubles, now it’s 99 rubles. There are no sanitary pads. They appear on the shelves in the morning and by evening there is nothing left. They say many malls do not sell sanitary pads at all,» a supermarket cashier Saltanat Ormonova told. 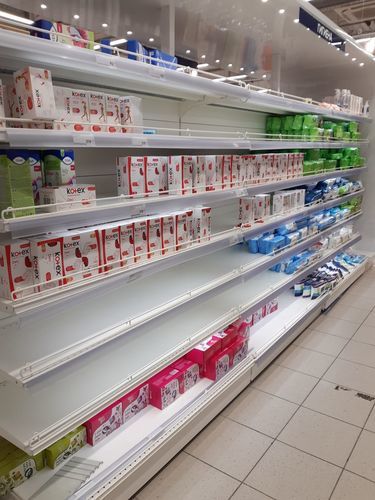 According to her, since the beginning of March, there have been long queues for groceries in shopping centers.

«There are no limits on the number of purchases. But when there is a shortage, it is difficult to get more than two pieces of one product through the cash register,» she said.

The situation in the housing market is also changing. Apartment rent started to increase.

«Apartment rents have gone up, but not significantly so far,» Nurgul Kaimova, head of a real estate company, said.

She said that Russian banks have stopped issuing mortgages.

«Those who got mortgages earlier were lucky, because now the interest rates have gone up. Their loans were issued in rubles, so the changes in the currency market will not affect them. Now the banks are not accepting the documents for the mortgage, and we are also in a standby mode. But the interest rates on state mortgage programs have not changed,» Nurgul Kaimova said.

No one is in a hurry to leave

Despite some difficulties, migrants are in no hurry to return home. Everyone is well aware that Kyrgyzstan’s economy is also suffering from sanctions. Many migrants have switched to costs saving mode and significantly reduced remittances to family and friends back home.

«I believe that we should not expect a mass outflow of migrants from Russia. The industries and professions where there is a demand at the moment are: workers in office services, business services, transport, construction, logistics, trade, as well as service provision and work without experience. These are the sectors where our compatriots predominantly work,» Raim Attokurov told.

Diaspora representatives are confident that the compatriots will be able to adapt to the new conditions. They have already lived through several economic crises and lockdowns there. They will learn to live under the sanctions as well.