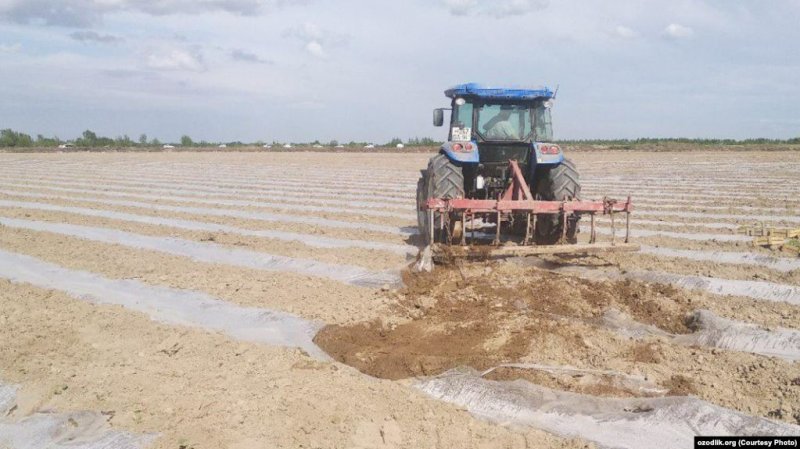 After 17 long years of growing cotton and vegetables on his farm in Uzbekistan, Abbas has decided to give up farming.

"I prefer to be unemployed," said Abbas, who didn't want his last name used for fear of retribution.

"The terms of the cluster-firm contracts are not acceptable to me," he told RFE/RL. "It means we have no independence whatsoever. I won't be working the land for myself anymore."

Abbas says his income would also be greatly reduced under a contract that is designed to maximize the profits of the cluster firm by exploiting farmers.

Indeed, Uzbekistan's cluster system is essentially a new form of "hidden" or "secret privatization" -- a scheme used by corrupt officials and their private-sector cronies in Eastern Europe during the 1990s to plunder the assets of state firms.

In Uzbekistan's case, the new private "clusters" are assuming the state's long-time monopoly control over the most profitable aspects of agriculture without adequately compensating farmers for their role.

The World Bank has pumped more than $637 million into Uzbekistan through its Horticulture Development Project since 2014 -- including $500 million in World Bank loans approved in January 2018 when Tashkent launched the so-called "cluster" reform plan.

Hideki Mori, the World Bank's country manager for Uzbekistan, says those funds are meant to help create "better paid jobs in rural areas" of the country, where about half of the country's 16 million people live.

Mori says the international financing also should help Uzbekistan bolster "food security and exports" through "transitional reforms" that move the country "from a state-driven development model to a private-sector-led economy."

But Abbas says the reforms are merely enriching the shadowy owners of the new private cluster firms. All farmland remains state-owned.

Farmers like Abbas who do the heavy field work say they are getting even less compensation and still must take on the risk of losses from failed harvests.

Neither farmers nor local officials are certain about the identities of the owners of many clusters. But there are reports of links between some senior officials in Tashkent and the lucrative clusters.

The private agriculture monopolies are being set up by the government in Tashkent without competitive public tenders or transparency.

And one former district governor told RFE/RL that he'd been pressured by senior officials in the Interior Ministry and presidential administration to distribute contracts for the most productive farmland to specific clusters.

There are also unconfirmed allegations that some cluster owners have links to senior officials in Tashkent -- including relatives of Mirziyoev in his native region of Jizzakh.

Mirziyoev announced on December 9 that he is expanding Uzbekistan's two-year-old cotton cluster system to include fruit and vegetable farms.

Justifying the move, Mirziyoev credited the private cluster firms for boosting the productivity of Uzbekistan's strategic cotton sector by 30 percent in 2019.

But international experts warn that any initial gains from so-called "cluster reforms" are likely to fizzle out in the long run unless more competition is introduced.

For now, the state has marked out monopoly territory where each private cluster firm operates -- reducing incentives for farmers like Abbas who have no choice over which cluster they work through.

"Without competition between clusters, it's already failure by design," says Nodir Djanibekov, a researcher at the Leibniz Institute of Agricultural Development in Transition Economies in Hannover, Germany.

"If the clusters don't compete for each farmer, and if the farmers don't have a choice about which marketing channel they use, you still have a monopoly," Djanibekov tells RFE/RL. "Instead of a state monopoly, it becomes a private monopoly."

"In this situation, the private clusters will only offer farmers the minimum price that is guaranteed by the state for their crops," says Djanibekov, whose work has been cited in policy papers on Uzbekistan published by the World Bank.

"The way to ensure farmers produce more is to pay them a better price," he says. "If the farmers don't see any incentives, production will just start collapsing."

A similar scenario occurred with Tajikistan's cotton farmers in 2000 and has been unfolding more recently in Kazakhstan, Djanibekov warns.

Djanibekov notes that the interests of ordinary farmers "are not very well represented" in the government's decrees about agriculture clusters.

"There is not much about protecting farmers in the decrees except the guaranteed minimum price" for their crops, Djanibekov says.

No Freedom, No Choice

If Abbas did choose to continue working his farm, the cluster he would be forced to work through would tell him which crops he must cultivate.

In the past, state authorities required farmers to meet quotas on crops they were required to grow -- usually cotton.

But once they'd planted enough to fulfill the quota, farmers like Abbas found themselves in a de facto situation where they could grow whatever they wanted on the remaining land they'd leased from the state.

Since 2018, when Mirziyoev ordered farmers to diversify away from cotton by planting chili peppers, the plants shriveled up and died on farms that lacked adequate irrigation for the crop.

Still, he managed to cover his losses because he was successful with the other crops he'd chosen to sow -- carrots, potatoes, cabbage, and strawberries.

"Under this new system we will have to grow whatever the cluster orders us to grow," Abbas told RFE/RL.

"On all of this land I would only be working like a manager who receives a salary from the cluster," Abbas explained. "I would have to have a team of 10 workers who would also be paid by the cluster -- 200,000 soms per month," or about $21.

Meanwhile, Abbas's cluster contract would force him to pay inflated prices for seeds or seedlings, fertilizer, and fuel that was previously provided to him directly by state agencies.

Some farmers tell RFE/RL they've had to pay five times as much for the fertilizer they are forced to buy from a cluster than they would have had to pay on the open market in Uzbekistan.

After the harvest, farmers like Abbas are required to sell their crops to the cluster at the state's guaranteed minimum price rather than the actual market price.

That allows the clusters to maximize profits when they resell the crops at premium prices in Uzbekistan or export for even higher international market prices.

Abbas has never been allowed to export his crops himself because the state does not grant export licenses to individual farmers.

On the other hand, if Abbas's crop would fail, he would remain indebted to the cluster for the cost of the seeds and fertilizer it provided to him at greatly inflated prices during the planting season, as well as for the fuel he used throughout the year.

He also would lose his right to cultivate the state-owned land he has farmed since 2002 in the Tashkent region.

Waiting To Be Paid By A 'Ghost'

Akramjan Novotov, a cotton farmer in the Qashqadaryo region who was forced to work through a new cluster, told RFE/RL that he should have earned a profit of 40 million soms -- about $4,200 -- on the crop that he delivered in September.

But Novotov is still waiting to see how much he will be paid. His cluster contract stipulates that the firm does not have to pay him until December 31.

In the Oq-Qurghon district of the Tashkent region, more than 300 farmers who were forced to sign agreements with a cluster called ABC Oq-Qurghon Agroklater say they've not been paid for two years.

A Tashkent regional official confirmed that the firm owes 18 billion soms, or about $1.9 million, to the farmers -- and that none of the contracts the farmers signed contained an address for the company.

"I can say that farmers are not protected by the law in this situation," the Tashkent region official told RFE/RL.

"This cluster company is catastrophic," one of the farmers told RFE/RL, asking to remain anonymous due to concerns for his personal safety. "We have not received money for our 2018 wheat crops and no money for the cotton and wheat we grew in 2019."

"The cluster has gotten a new boss three times in two years," the farmer continued. "We are supposed to be paid by December 31. Now we are totally buried in debts."

The farmers say they want to complain directly to the cluster but are unable to find its office building or address.

"We originally received our orders about which crops to grow from the [regional] mayor's office, but now they just shrug if we ask about our money," the farmer said.

"The mayor's office told us that they also don't know the address of the firm," he said. "The cluster looks like a ghost that cannot be seen or found."