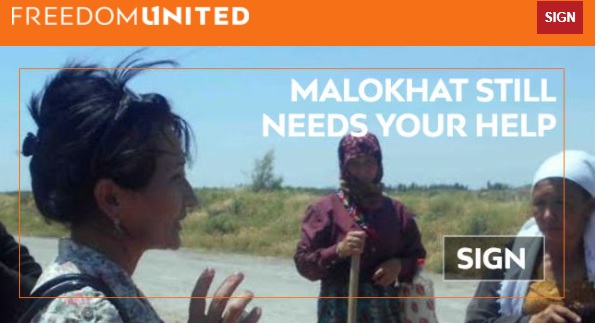 Remember Malokhat Eshonkulova? Last November her home was raided by Uzbek police and some of her belongings were confiscated. The police were searching for her cell phone and computer. She was targeted for her work to end forced labor in Uzbekistan’s cotton industry.

Generous Freedom United supporters helped fund her legal costs. She has sought tochallenge a travel ban following her detention at Tashkent airport in January when she was attempting to attend an overseas labor rights seminar, and to secure her permanent registration, which she had been stripped of, preventing her from securing an exit visa to travel.

Will you sign our campaign to drop the charges against Malokhat?

Four months on, and what’s happened? After paying imposed fines and commissioning specialist legal advice, thanks to Freedom United supporters, Malokhat’s travel ban was lifted last month. However, the withholding of her registration, an arcane Soviet-era system, is stopping her from traveling – registration is needed to secure an exit visa.

Malokhat filed an appeal to fight the denial of her permanent registration. A hearing in late February upheld the first court’s decision without considering many of the legal arguments presented in her appeal. It is a tiring journey but Malokhat is not giving up.

Unbelievably, the Uzbek authorities have sought to undermine our work labeling our arguments as ‘absurd’ and claiming to have no record of the search of confiscation of her belongings, which she has now recovered, having paid the fines imposed.

Meanwhile, Malokhat continues her work reporting on fellow journalists’ trials, gathering information on the cotton industry and sharing her findings.

Will you support Malokhat by joining our campaign?

Building a strong supporter base for Malokhat through signatories on our campaign offers Malokhat important protection as it helps show the Uzbek authorities the international concern for her welfare and support for her work.