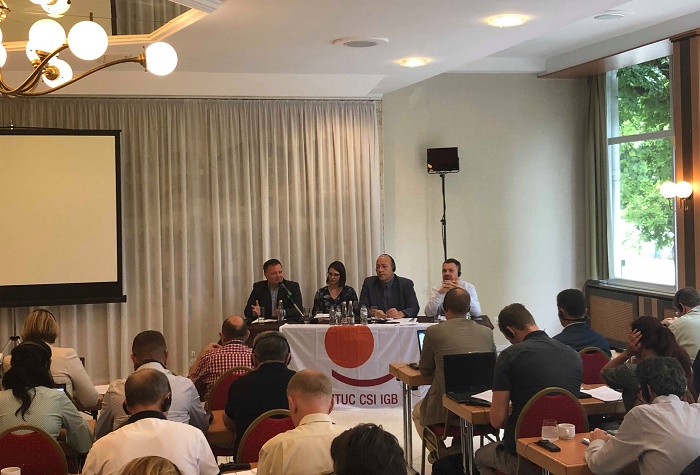 The 12th PERC Summer School “Democracy and freedoms in Europe and Central Asia” took place in Budapest, Hungary, on 9-11 July. In his opening speech PERC President Irakli Petriashvili spoke about challenges to the freedom of association and democracy in the region, growing inequalities and gender gaps, and called all unions to be vigilant and pro-active to prevent further erosion of democracy and to advance workers’ rights and freedoms.

Laszlo Kordas, MASZSZ President, welcomed the School and highlighted that in Hungary collective rights, social dialogue and security were significantly reduced, while the labour code serves interests of big MNEs, virtually making implementation of the right to strike impossible, while allowing of 400 hours overtime work per year with a 3 year compensation delays. Brigitta Zsura- Szabo, LIGA, highlighted importance of the newly adopted ILO Convention on Violence and Harassment in the world of work and called for further improvement of the life-work balance and gender equality.

Owen Tudor, ITUC Deputy General Secretary, introduced the decisions of the ITUC Congress and respective pillars of the ITUC work in coming 3 years: Democracies for People: Change the Rules; A New Social Contract; Just Transition for Climate Ambition (Frontline campaigns and four pillars for action 2019). He also highlighted some recent successes of unions, including mobilisation of Croatian unions who collected 700000 signatures (23% of voters) against 67 years pension age, adoption of the ILO convention and the ILO Declaration, achievement of strong conclusions by the Committee on Application of Standards in cases or Turkey and Kazakhstan on non-implementation of the ILO Convention 87 on Freedom of Association by the governments.

Challenges in different regions of the PERC were debated. Enisa Salimovich gave an overview of the situation in SEE countries, where working people do not sense support from the governments, where corruption flourishes, rule of law is not respected and violated by employers and by the governments. Loss of perspective forces young people to seek employment and life prospects in more equal and well-governed countries. Andrzej Adamczyk, Solidarnosc and EESC, spoke about the need to reflect upon history and moments when trade union action brought decisive historical changes on the continent. He also gave information about revised Eastern Partnership policies and perspectives for trade unions to use them. Jozef Niemec from the ETUC and Goda Neverauskaite from the PERC presented trade union work within different institutions created under Association and DCFTA agreements between the EU and Ukraine, Moldova and Georgia. Anton Leppik, PERC, presented an overview of the workers rights situation in Central Asia, while Markhaba Khalmurzaeva, Central Asian labour rights monitoring mission, informed about mechanisms for collecting and communicating reliable information about human and workers rights situation in that region.

ETUC and ITUC wage increase campaigns were debated, with the pressing need to increase minimal wage to the level of decent living, but also to develop collective bargaining as mechanism for fairer wealth redistribution.

Sergeus Glovackas, ILO-ACTRAV desk officer for Europe and Central Asia, informed about outcomes of the centenary International Labour Conference, particularly adoption of the ILO Convention and ILO Declaration on future of work, about recent ratification of ILO conventions in the region.

The School discussed programme for the PERC action in the next statutory period in a view of preparing of the 4th General Assembly.