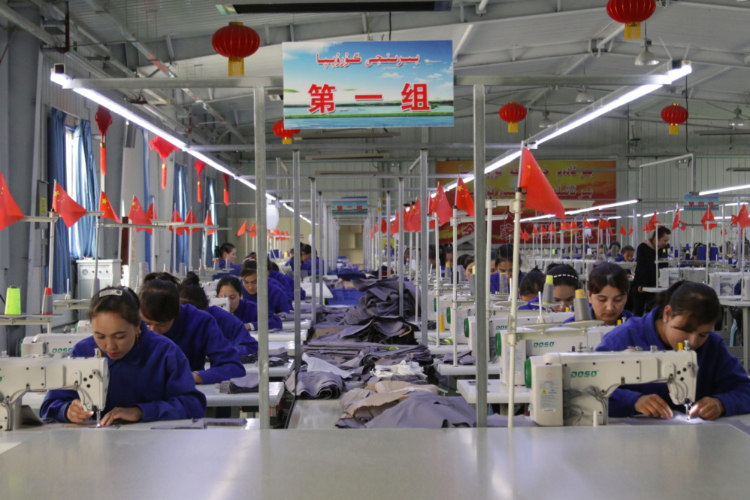 72 Uyghur rights groups are joined by over 100 civil society organisations and labour unions from around the world in calling on apparel brands and retailers to stop using forced labour in the Xinjiang Uyghur Autonomous Region (“Uyghur Region”), known to local people as East Turkistan, and end their complicity in the Chinese government’s human rights abuses.

The groups have issued a call to action seeking brand commitments to cut all ties with suppliers implicated in forced labour and end all sourcing from the Uyghur Region, from cotton to finished garments, within twelve months.

“Now is the time for real action from brands, governments and international bodies – not empty declarations. To end the slavery and horrific abuses of Uyghurs, Kazakhs and other Turkic Muslim peoples by the Chinese government, brands must ensure their supply chains are not linked to the atrocities against these people. The only way brands can ensure they are not profiting from the exploitation is by exiting the region and ending relationships with suppliers propping up this Chinese government system,” said Jasmine O’Connor OBE, CEO of Anti-Slavery International.

The Chinese government has rounded up an estimated 1 to 1.8 million Uyghurs and other Turkic and Muslim people in detention and forced-labour camps, the largest interment of an ethnic and religious minority since World War II. The atrocities in the Uyghur Region – including torture, forced separation of families, and the compulsory sterilisation of Uyghur women – are widely recognised to be crimes against humanity. A central element of the government’s strategy to dominate the Uyghur people is a vast system of forced labour, affecting factories and farms across the region and China, both inside and beyond the internment camps.

Gulzira Auelkhan, a Kazakh woman who was formerly detained in an internment camp and then subjected to forced labour in a factory said: “The clothes factory was no different from the [internment] camp. There were police, cameras, you couldn’t go anywhere.”

“Global brands need to ask themselves how comfortable they are contributing to a genocidal policy against the Uyghur people. These companies have somehow managed to avoid scrutiny for complicity in that very policy – this stops today,” said Omer Kanat, Executive Director of the Uyghur Human Rights Project.

The supply chains of most major apparel brands and retailers are tainted by Uyghur forced labour. Major corporations claim not to tolerate forced labour by their suppliers, but have offered no credible explanation as to how they can meet this standard while continuing to do business in a region where forced labour is rife.

“Forced labourers in the Uyghur Region face vicious retaliation if they tell the truth about their circumstances. This makes due diligence through labour inspections impossible and virtually guarantees that any brand sourcing from the Uyghur Region is using forced labour,” said Scott Nova, Executive Director of the Worker Rights Consortium.

“Given the lack of leverage and the inability to prevent or mitigate adverse human rights impacts, apparel brands and retailers must take the necessary steps to end business relationships connected to the Uyghur Region in order to fulfil their responsibility to respect human rights as defined by the UN Guiding Principles on Business and Human Rights,” said David Schilling, Senior Program Director of
Human Rights at the Interfaith Center on Corporate Responsibility.

Groups are seeking the following commitments from bands and retailers:

About the Coalition to End Forced Labour in the Uyghur Region

The Coalition to End Forced Labour in the Uyghur Region is a coalition of civil society organisations and
trade unions united to end state-sponsored forced labour and other egregious human rights abuses against people from the Uyghur Region in China, known to local people as East Turkistan.

The coalition is calling on leading brands and retailers to ensure that they are not supporting or benefiting from the pervasive and extensive forced labour of the Uyghur population and other Turkic and Muslim-majority peoples, perpetrated by the Chinese government. Right now, there is near certainty that any brand sourcing apparel, textiles, yarn or cotton from the Uyghur Region is profiting from human rights violations, including forced labour, both in the Uyghur Region and more broadly throughout China.

We are asking brands and retailers to exit the Uyghur Region at every level of their supply chain, from cotton to finished products, to prevent the use of forced labour of Uyghurs and other groups in other facilities, and to end relationships with suppliers supporting the forced labour system. Brands and retailers must take each of these steps in order to fulfil their corporate responsibility obligations to respect human rights as defined in international principles such as the UN Guiding Principles on Business and Human Rights.

The coalition urges national governments to strengthen and enforce existing laws prohibiting trade in goods produced using forced labour, and to adopt and implement binding laws requiring human rights due diligence in supply chains. The coalition is further committed to working with multilateral organisations like the ILO and OECD to use their mechanisms to end forced labour in the Uyghur Region as well as forced labour and human trafficking of people from these communities.

We call on governments, MSIs, brands, and other stakeholders to join us in challenging this abusive system and together build the economic and political pressure on the Chinese government to end forced labour in the Uyghur Region.

Endorsers of the Call to Action