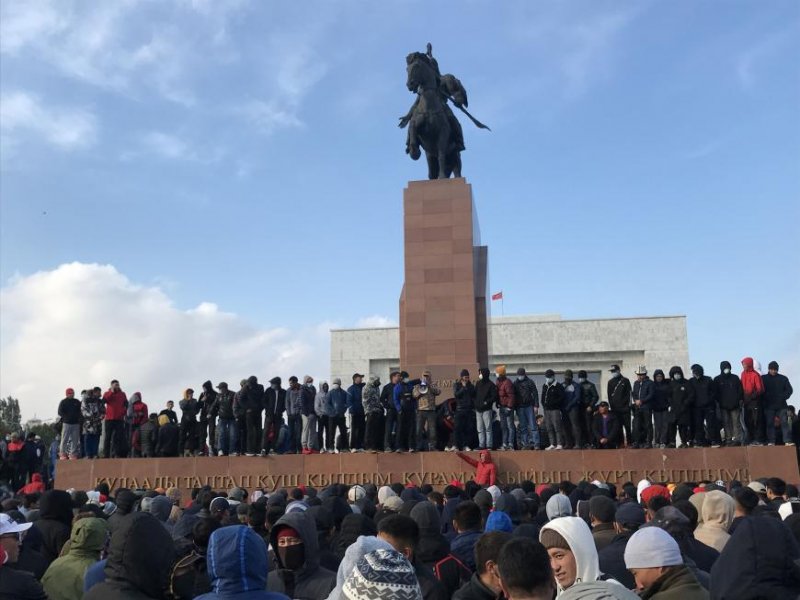 Protesters gathered on Ala Too Square in Bishkek, Kyrgyzstan's capital on October 6, 2020, two days after a disputed parliamentary election. © 2020 Private

(Berlin) – Law enforcement forces in Kyrgyzstan responding to protests and unrest should uphold human rights and the rule of law, including if provoked by some protesters, Human Rights Watch said today. Clashes between protesters and law enforcement on the evening of October 5, 2020, following the flawed October 4 parliamentary election, led to significant casualties, including 1 death and 164 hospitalizations, according to health officials cited in local media.

Eleven of the 16 political parties that took part in Kyrgyzstan’s parliamentary elections have formed a coordination council to oversee a transition of power in response to the political unrest. Several top government officials have stepped down, including the prime minister, although President Sooronbay Jeenbekov has not resigned. In a BBC Radio interview on October 6, the president said he is willing to work with members of the coordination council, but that he is Kyrgyzstan’s “legitimate president.”

“It is incumbent upon those in power to respect fundamental human rights, especially during great political upheaval,” said Mihra Rittmann, senior Central Asia researcher at Human Rights Watch. “Protecting the right to life, as well as freedoms of speech, assembly, access to information, and the right to protest, are critical in times like these.”

Opposition parties called for protests in Bishkek’s main square after the outcome of the elections was announced on the evening of October 4. By some estimates, several thousand people gathered on Bishkek’s main square. Only one opposition party was officially deemed to have passed the seven percent threshold to win seats in parliament amid reports of vote buying by pro-government parties. Protesters demanded that the Central Election Committee should annul the results and hold a new election. The Organization for Security and Cooperation in Europe Office for Democratic Institutions and Human Rights (OSCE/ODIHR), which carried out a limited election monitoring mission, concluded that “Kyrgyzstan’s parliamentary elections were generally well run and candidates could campaign freely, but credible allegations of vote buying remain a serious concern.”

Kyrgyzstan’s Central Election Committee announced on October 6 that they had annulled the outcome of the elections. A date for new parliamentary elections has not been set.

Law enforcement forces did not interfere during the early part of the protests on October 5, but responded with force to an attempt in the evening by some in the crowd to break through the gates of the White House, where both the president and parliament sit. Media reported that law enforcement responded using water cannons, tear gas, and flash grenades, as well as rubber bullets or metal ball projectiles, in an attempt to break up the protest. Several opposition politicians who had gathered on the square were wounded. Police did not make any arrests.

Clashes between groups of protesters and police went on overnight. In the early morning of October 6, protesters stormed the White House and the State Committee on National Security (GKNB) in Bishkek, taking control of the buildings. Protesters freed several politicians held in detention by the security agency, including the former president, Almazbek Atambaev. Photographs posted to social media showed the top floors of the White House on fire.

Local media, citing a Health Ministry announcement, reported that 686 people, including law enforcement officers, sought medical care overnight in Bishkek. Of those, 164 were hospitalized, 7 are in intensive care, and 1 man died. The Health Ministry did not provide details about the man’s death.

Law enforcement officers are obligated under international law to respect the right to freedom of assembly as well as human rights standards on the use of force, including when dispersing protests. While the authorities can intervene when protesters use violence or to try to prevent or respond to the commission of crimes, they must do so proportionately. The United Nations Basic Principles on the Use of Force and Firearms by Law Enforcement Officials require police to use nonviolent means, such as demands, to vacate an area, before resorting to force and firearms. 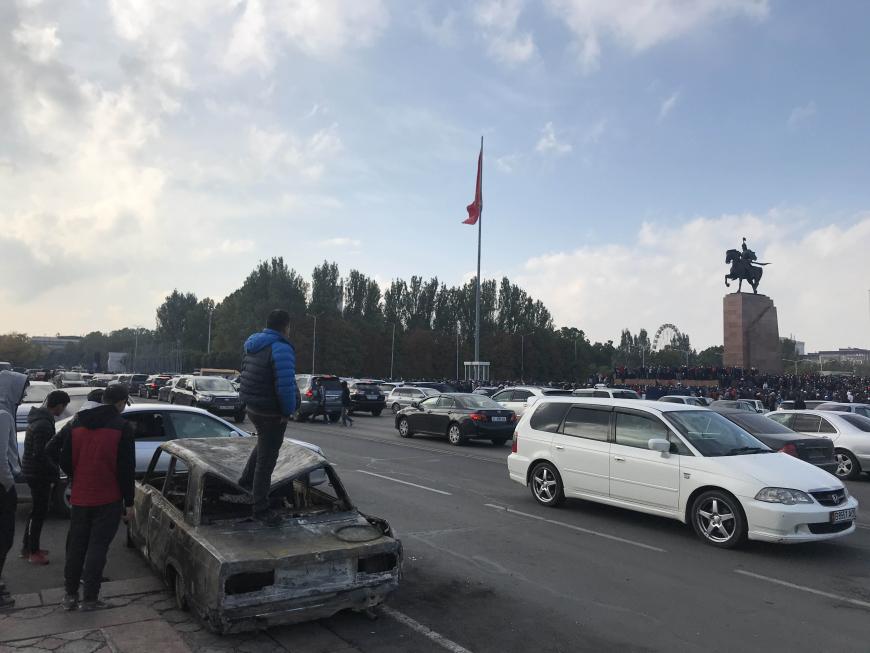 The rights of media workers should also be protected and journalists should be able to carry out their duties in safety, Human Rights Watch said. The local media watchdog, Media Policy Institute, reported that since the morning of October 5, several journalists have been attacked, including by the police, while doing their job. Aibol Kozhomuratov, a social video producer at Current Time TV, tweeted a clip showing a law enforcement officer shooting a weapon at him while he was reporting on the unrest.

Kyrgyzstan’s international partners should reinforce to the Kyrgyz government the importance of upholding their international human rights obligations and urge government leaders to pursue political dialogue to resolve the current crisis. The European Union on October 6 urged “all political forces in the country to act within the framework of the constitution and to settle their disagreements peacefully.” The Chairmanship of the Organisation for Security and Co-operation in Europe (OSCE) and the OSCE Office for Democratic Institutions and Human Rights (ODIHR) both called for inclusive political dialogue.

“Kyrgyz authorities should ensure that journalists covering the political unrest in Kyrgyzstan can do their jobs safely, without fear of attack,” Rittmann said. “Indeed, the authorities have the obligation to respect all basic human rights and to ensure that police respond to protests in a lawful and proportionate manner.”