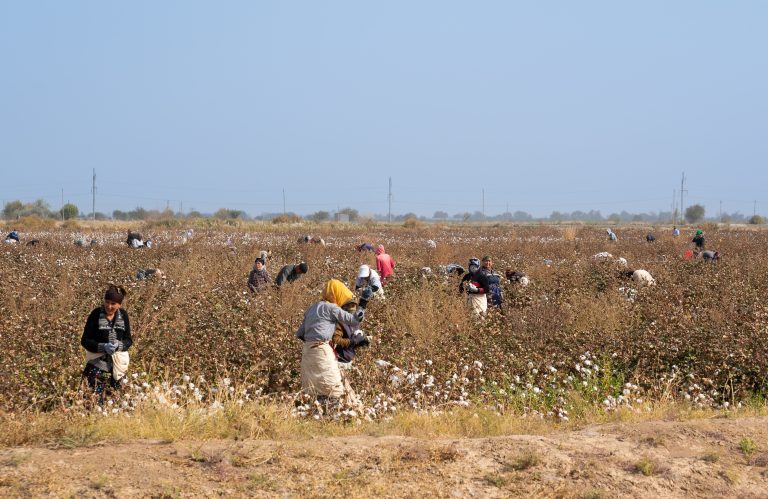 In this guest column written exclusively for Apparel Insider, Lynn Schweisfurth of the Uzbek Forum for Human Rights argues that while the end of systematic forced labour in the cotton fields of Uzbekistan is an important landmark, significant human rights risks remain.

BERLIN – While the Uzbek Government celebrates the end of the boycott of Uzbek cotton following the eradication of systematic, state-imposed forced labour, farmers find themselves at the mercy of a system rigged against them.

Independent monitoring findings of the 2021 cotton harvest concluded that no systematic, government-imposed forced labour was used, prompting the Cotton Campaign to lift its boycott of Uzbek cotton. This was a landmark achievement and proof that the Uzbek government has delivered on its commitments to end its use of forced labor in the cotton sector. The decision received widespread national coverage, including on prime-time TV, and represents a remarkable success story of over a decade of campaigning by civil society groups.

However, less is known about the tens of thousands of farmers and farm workers who manage cotton production in Uzbekistan. Despite the privatisation of the agriculture sector, the Soviet style state control over agriculture remains in place. Farmers farm under near complete state direction. The state leases all farmland and most farmers do not have copies of their land lease agreements which are held by government officials. The state sets a minimum price for cotton and determines the amount of land designated for the growing of cotton and other agricultural products that farmers are obliged to grow for private companies or so-called clusters (vertically integrated cotton producing companies).

Since the privatization of the cotton sector began in 2018, farmers have discovered they were never intended to be the winners in this new game and that the rules were stacked against them. Clusters, with the support of government officials, enjoy close to monopolistic control in the districts in which they operate. While some farmers have certainly benefitted in the new system, it is because they have had the good fortune of working with clusters that have demonstrated good will in their relations with the farmers who supply them, rather than regulations that protect their interests. Countless other farmers have become victims of less scrupulous players. Illegal land confiscations, blank contracts without purchasing prices for cotton, failed payments, unrealistic production targets, and complete dependence on clusters for access to low interest loans and delivery of inputs such as fertilizers and fuel at fair prices has placed Uzbek farmers at an extreme economic disadvantage without means of redress.

The raft of reforms, including presidential and cabinet decrees, introduced to modernise Uzbekistan’s archaic agriculture sector were in essence designed not to benefit farmers, but primarily privately owned cotton clusters. Other than vague commitments to investments and job creation, the impact on farmers and rural residents was given little consideration.

The result has been the creation of a quasi-feudalistic system whereby clusters, with the involvement of government officials, enjoy supreme control over the production of cotton and other agricultural goods along with ample opportunity for exploitation. Clusters have been given control over land, water, and ginneries by the state, as well as internal irrigation networks and hydraulic facilities. Despite recent changes to the law to allow more than one cluster to operate per district, the privatisation process has seen the emergence of a system based on dependency and local monopolies.

The situation is exacerbated by the government’s continued involvement in the agriculture sector. Regional administrations (hokimiyats) and the Ministry of Agriculture determine the allocation of land and the amount of cotton that the farms are obliged to grow for the cluster. Production targets are determined by officials who have the power to confiscate the land if farmers fail to meet them, and the targets are often inflated.

No Choice, no Bargaining Power

Because clusters control all channels for the production, delivery and processing of the cotton they produce, farmers have no choice but to sell their cotton to the cluster in their district. During the 2021 cotton harvest, monitors interviewed 76 farmers, all of whom said they could not choose whom they delivered their cotton to, depriving them of any bargaining power over prices and terms of their contracts.  A new decree passed in November 2021 allows farmers to voluntarily enter into futures (pre-financing) contracts for raw cotton with any cotton-textile cluster in their region. However, in reality, it appears that farmers are still unable to choose their clients. Unsurprisingly, given such denial of market power, more than half the farmers interviewed by Uzbek Forum during the 2021 harvest said they were dissatisfied with the cluster with which they contracted.

In early 2022, cotton farmers who attempted to contract with clusters in other districts faced administrative obstacles from local branches of the Ministry of Agriculture and district officials. Despite the new decree, the Department of Agriculture refused to register the contracts the farmers had concluded, a necessary procedure for recognizing the validity of a contract. During a meeting with the district leadership, according to the farmers, the prosecutor said he “could not allow cotton grown in their district to be sent to another district.”

Another farmer from Khorezm region who asked not to be named, said that her attempts to discuss a guaranteed price with the cluster for cotton in 2022 were unsuccessful. Instead, she was ordered by the local agriculture department to sign a blank contract, obliging her to produce an undetermined amount for an undetermined price. Alternatively, she was told, she would lose her land.

The contract fraud is apparently widespread. According to a survey posted on March 6, 2022, by “Farmerga Madad” (Farmers’ Support) on the Telegram messaging channel, 899 out of 1,303 farmers said that their futures contracts with clusters did not include the price they would be paid for the 2022 cotton harvest. In some cases, farmers who had not received payment for the cotton they had delivered since 2019, were still forced to sign contracts with them.

The Farmers’ Council, which levies a compulsory membership fee on all farmers, is a quasi-governmental body, ostensibly set up to represent farmers’ interests. The Council has been noticeably unresponsive to complaints and in some cases, has even signed off on the blank contracts. Attempts by farmers to democratize the Council have been flatly rejected while initiatives to establish an independent farmers’ association, like other civil society initiatives in Uzbekistan, have faced many hurdles when trying to register.

With no-one else to turn to, farmers are therefore now organising to raise awareness of the problems they are facing and press the government for changes to the law that will protect their interests.

It appeared that a breakthrough had been reached when, for the first time, a group of independent farmers negotiated a futures contract for the 2022 cotton crop that would reflect the interests of cotton farmers. On February 5, 2022, a virtual conference was held  with representatives of the Ministry of Justice, the Ministry of Agriculture, the Farmers Council, representatives of the Cluster Association, and farmers to discuss the final proposal of a futures cotton contract. The contract gave farmers the protections they sought, including: a minimum purchase price before conclusion of contracts with clusters; the prohibition of blank clauses in contracts; the obligation of the cluster to pay 70 per cent of the total contracted amount of cotton in advance; and the ability of farmers to source fertilizers and fuel from suppliers other than the cluster.

However, what happened exemplifies the arbitrary use of power that the state wields over its citizens. Instead of implementing the new contract, the Ministry of Agriculture sent the old contract to local officials, making no mention of the basic provisions contained in the contract that had been negotiated.

Lack of Independence from Clusters

Some farmers have organized in an attempt to establish cooperatives to win bargaining power vis-à-vis the currently exploitative clusters. However, government officials and local agriculture departments have effectively stopped cooperatives from functioning by preventing other farmers from contracting with them. Some farmers who had expressed the wish to work with the cooperatives received threats from officials that they could face criminal charges and issued an “official warning” not to join them. In the end, farmers were forced into signing blank contracts with the only cotton cluster in their district.

Clusters also operate as gatekeepers to financing. Currently, only clusters can access low interest loans from the national Agriculture Fund, and thus farmers can only access financing through the clusters. Although legislation passed in 2020 stipulates that farmers and cooperatives are entitled to the same benefits and subsidies enjoyed by cotton clusters, a subsequent decree passed in November 2021 effectively prevents farmers and cooperatives from accessing the Fund’s loans, reinforcing barriers on farmers seeking to operate independently.

Amid the celebrations marking the end of systematic forced labour in the cotton fields, human rights organisations have been clear that significant risks remain. These are embedded in the lack of progress by the government in protecting citizens’ freedom of association that would empower farmers and address their vulnerability to exploitation as well as empower broader civil society to monitor and report on rights violations. Without independent trade unions, registration of independent NGOs and cooperatives, as well as a departure from the increasingly restrictive atmosphere for free speech and freedom of association, Uzbekistan’s new spring in the agriculture sector may be short lived.