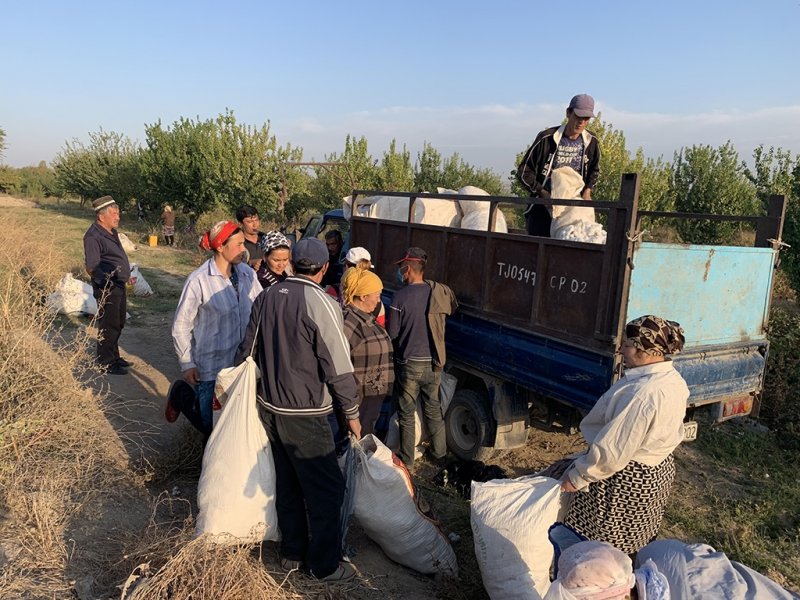 
Authorities in Tajikistan use a battery of tactics, ranging from threats to pleading, to get its government-sector employees to abandon their classrooms and clinics for the cotton field.

The goal is to improve the health of export figures, but the social costs are high. Those who refuse to comply with the program face the danger of dismissal. And the reluctant farmers, who would rather be growing other crops, are losing heaps of money.

Teachers who were prepared to speak to Eurasianet on the record were eager to justify their presence in the fields, a fact that indicates that government propaganda campaigns have proven successful – at least on the surface.

Barno Nazirova, a teacher of language and literature at a school in the Bobojon Gafurov district of the Sughd region, said that when she and her colleagues are in the fields, they have a chance to catch up on pressing issues.

“Young teachers ask for advice about how to find a common language with the students. Since there is time [in the fields], we give them detailed explanations,” Nazirova said.

Saodat Hodikhojayeva, also a teacher, said that the practice of educators picking cotton was just a continuation of what happened in Soviet times. And anyway, doing the work provides another line of income for the family budget, she said.

“The farmers need our help. Otherwise it is impossible. Cotton is our nation’s white gold. What is more, we are paid for every kilogram we collect,” Hodikhojayeva said. 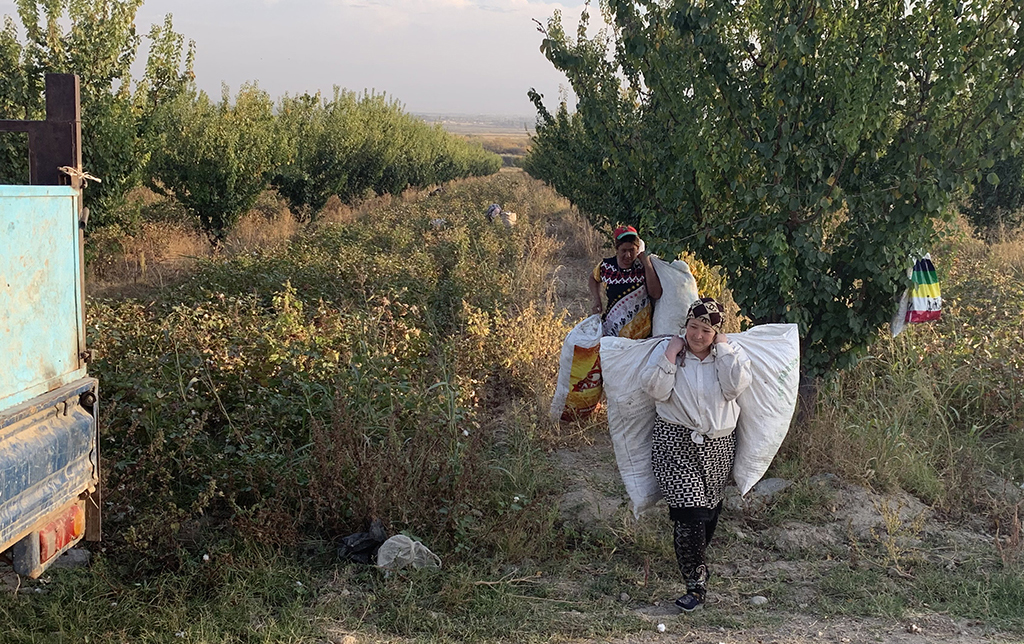 The Agriculture Ministry forecast that this year’s harvest would total 400,000 tons of raw cotton. The material is sold to businesses in countries like Turkey, China and Russia. By late October, pickers had gathered around 330,000 tons, a 95,000 ton increase on the same period last year, the Asia-Plus news website reported.

For each kilo of cotton picked, teachers stand to earn 60 diram ($0.06). A sack typically weighs around 14 kilos. One person can usually gather anywhere between 50 and 150 kilograms in day, depending on their energy and proficiency.

Nazirova said her group of teachers worked according to a schedule based on the subject taught.

“For example, on Monday, Tajik and English language teachers go to pick cotton. Tuesday will be the day of math and physics teachers, and then Russian language teachers. We take turns. That way, the children are never without teachers,” Nazirova said.

Some doctors who are unwilling to do the work pay somebody to take their place. The cost of hiring a laborer for two weeks is 300 somoni ($31). The person who does the actual labor also gets to pocket the fee for cotton picked.

Tajik pop stars have been enlisted to popularize the cotton harvesting campaign. Nigina Amonqulova, a well-known singer, recently posted a photo of herself in fields.

This public relations stunt appears to have been borrowed from Uzbekistan, where celebrities have likewise in the past posed for photos of themselves laughing and having a good time while engaged in the harvest.

The idea is to promote the mass involvement of the community in khashar, a word that describes ostensibly voluntary group labor to help the community, although in practice this is often difficult to distinguish from forced labor. Peer pressure is strong in rural communities and resisting the call to participate in khashar is frowned upon.

The governor of Sughd region, Rajabboy Ahmadzoda, and the mayor of Khujand, Maruf Muhammadzoda, have boasted about the cotton picked by their own staff as part of their khashar outings. In total, they collected nine tons, the officials said.

Qurbon Hakimzoda, the head of the Khatlon province, which is in the south of Tajikistan, also made a show of working in the fields and claimed to have personally picked 44 kilos. Borrowing from the Soviet playbook, Hakimzoda pitted his province’s various localities against one another in a competition. The town of Levakant went on to win the production race, a feat that earned them a 15,000 somoni ($1,500) prize from the governor. 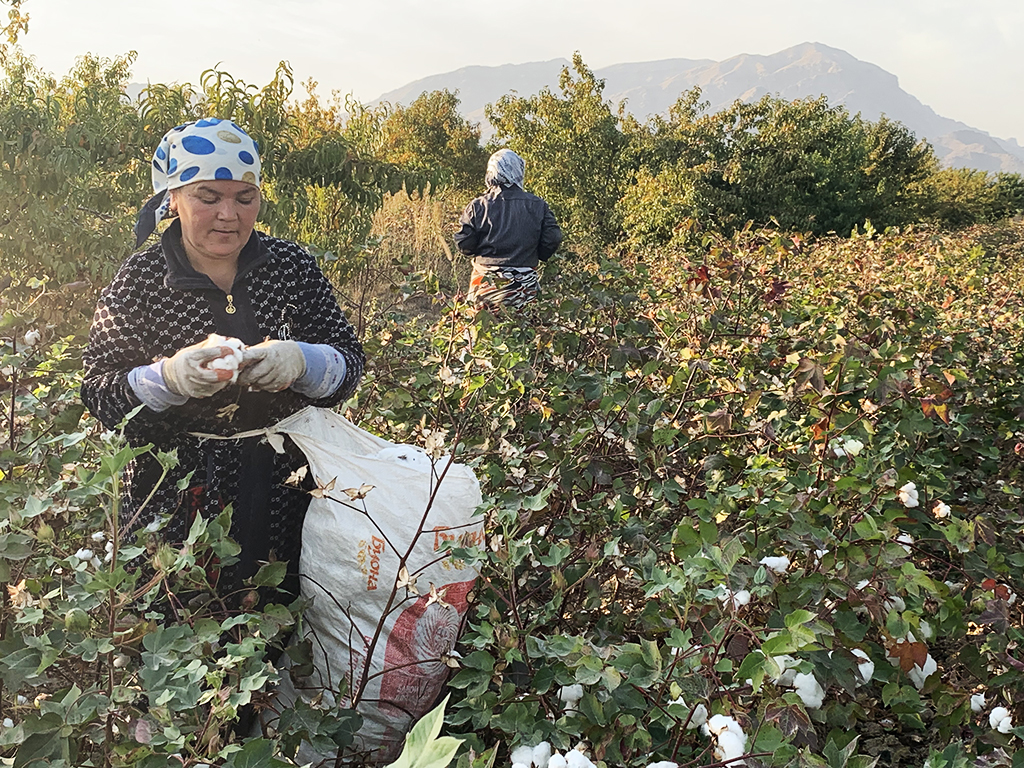 The notion that people are willingly flocking to take part in exhausting and often health-sapping labor is largely an illusion, however.

One farmer in the Bobojon Gafurov district told Eurasianet on condition of anonymity that local residents tend to abandon the area in numbers just to find any job alternative to cotton-picking. It is this fact that makes coercive enlistment a necessity.

“There are no people to hire for the cotton-picking. If we do not summon teachers and doctors for khashar, the collective farm will just go broke,” the farmer, whose name is changed here to Mansur to preserve his anonymity, told Eurasianet.

As Mansur explained, growing the crop entails considerable costs and losses. Growers estimate that cultivating one hectare can costs around 13,000 somoni (more than $1,300). But that hectare will yield a cash sum less than half of that in returns.

Raw cotton is sold to buyers, either from abroad or from local middlemen, at 4.80 somoni ($0.50) per kilo. Prices should be almost 20 percent higher for farmers to break even, Mansur said.

“On the international commodities market, the price of cotton is usually about 62 cents per pound,” Mansur said, talking in terms of the weight measurement used on global trading floors. One pound is equivalent to 450 grams.

“Nobody is going to buy from us for any more than 50 cents. That is why we cannot afford to pay the pickers more than six cents. And people will not come for such a small amount of money,” Mansur said.

Other crops would be preferable and more profitable, but farmers working on leased land are given no choice in what they cultivate.

“Local authorities force us to sow cotton. They say this is the government’s strategy, white gold, and so and so forth. When we tell them that we make no profit, it has no effect,” Mansur said.

The losses made on cotton have to be recouped by cultivating tomatoes, onions or melons wherever and whenever that is possible. The return on fields where those crops grow can run up to $10,000 per hectare.

“If we do not grow cotton, the authorities will just not let us grow anything at all,” he said.

This all happens because cotton is an important cash crop for Tajikistan. Sales of the material accounted for around 17.5 percent of exports in 2015. Experts say the insistence on keeping the cotton industry going stems from the desire to remedy the country’s highly lopsided trade balance.

According to official data, Tajikistan imported $4.2 billion worth of goods in 2018, but exported only $1.1 billion.

An economist, who agreed to speak to Eurasianet under the pseudonym Suhail Qodirov, said the president has been persuaded to preserve his existing export policy by overly optimistic projections.

“According to the forecasts reported to the president, one kilo of cotton should cost about $2. And so, to somehow fix the trade balance, the authorities decided to increase cotton production. But these forecasts have not proven accurate and now everybody is losing money,” Qodirov said.