The Situation with Uzbek Cotton: Why the Pledge Remains in Place and a Path Forward 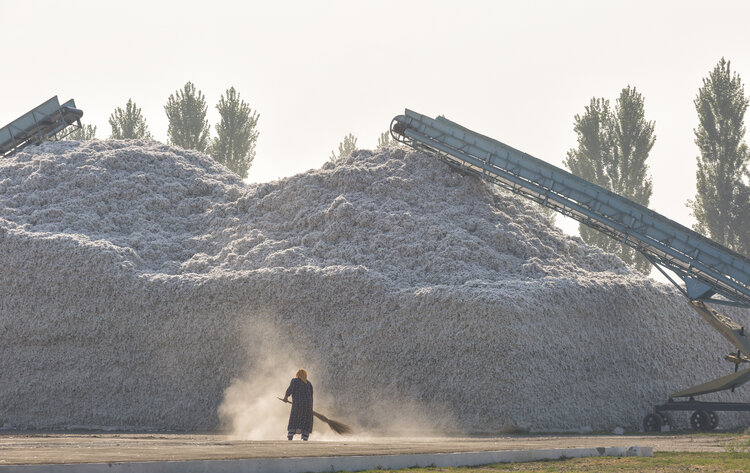 By Jamie Fortin and Patricia Jurewicz

Uzbekistan is a country in transition. In recent years, the Uzbek government eliminated state-sponsored forced child labor in the cotton harvest, and then committed in 2017 to eliminate forced adult labor. The government has made significant progress toward achieving that commitment, including increasing cotton picking wages and enacting measures to abolish government production quotas for cotton.

Responsible Sourcing Network (RSN) and the Cotton Campaign (CC), of which RSN is a founding member, welcome the Uzbek government’s high-level political commitment to end forced labor in the cotton sector, however, the risk of forced labor remains high. Earlier this year, the ILO reported that despite the government’s political commitment and ambitious reform program, significant numbers of pickers worked in conditions of forced labor in the 2019 harvest, approximately 102,000 people representing 5.9% of all pickers in the harvest. Independent NGO monitoring of the 2019 harvest revealed detailed accounts of human rights violations, and continued mobilization of civil servants, bank employees, law enforcement, and military recruits to pick cotton. Uzbekistan lacks independent, fair, and effective recruitment systems, so although cotton clusters and farms have recently been privatized, most recruitment channels are run through the same government-controlled mechanisms as previous harvests. In a survey conducted by Solidarity Center and RIWI Corp, less than half (48.3%) of those who picked cotton in 2019 said they could refuse to do so, demonstrating the crucial need for responsible recruitment mechanisms.

Though the Uzbek government made public commitments to free educators and health care workers from the 2019 harvest, one kindergarten caregiver recounted:

“We did as we were told or we would have been left without our jobs. We did not call the hotline because they [the government] are forcing me to pick cotton and at the same time putting up banners that say forced labor is prohibited!”

In evaluating the key actions and outcomes set out in the CC’s Roadmap of Reforms, it is clear that the Uzbek government has made significant progress toward meeting the first two core objectives: Ending Systemic Forced Labor and Enacting Structural Reform, although work remains. But the government has made far less progress toward the third core objective, Empowering Civil Society.

Restrictions on freedom of expression have eased in recent years, with some critics allowed to voice their opinions and concerns about the government on social media on some issues. Significantly, the government has also permitted independent human rights defenders to monitor the harvest in partnership with the ILO and has reduced interference with other independent monitoring. However, the Uzbek government has continued to block independent human rights and labor rights NGOs from registering and has subjected some activists to reprisals, harassment, or interference in their work. Only one independent human rights NGO  has been allowed to register in 2020, the first such group registered since 2003, while multiple other applications to form human rights or labor rights organizations were rejected, some repeatedly. In addition, introduction of an updated NGO Code has been delayed, and the draft code has not been made public for feedback or shared with experts although it was promised to members of the Cotton Campaign in early 2020.

Continuation of the Uzbek Cotton Pledge

While RSN and the pledge signatories are encouraged by the significant changes that have taken place in Uzbekistan, the work to end forced labor completely remains unfinished, as the 2019 harvest demonstrated. The Uzbek Cotton Pledge -- a commitment not to allow Uzbek cotton in supply chains due to concerns over forced labor signed by over 300 brands and retailers -- states that it will remain in place until the elimination of state imposed forced labor is independently verified by the ILO as well as determined by the Cotton Campaign.

Given the ILO and independent monitoring findings of significant forced labor in the 2019 cotton harvest, the pledge remains in place. This pledge status was agreed-upon in consultation with pledge signatories.

After review of the 2020 harvest results, RSN, CC members, and pledge signatories will again evaluate the findings and make a determination about the status of the pledge.

Seeking to recognize the important progress made in Uzbekistan and responding to concerns from the global business community about the need for assurances of no forced labor, the CC has developed a model that would allow producers not using forced labor to access international markets. We are proposing an enforceable and transparent sourcing model equipped with a worker-driven grievance and remediation mechanism; a multi-stakeholder, co-governed board; and an independent monitoring body. No system is yet in place to ensure that cotton is harvested in Uzbekistan free of forced labor since current monitoring does not operate at field level. Thus, there is an emerging need to allow a way for producers not using forced labor to gain access to international buyers, and to provide global brands with confidence they are compliant with international laws.

This is a critical juncture for human rights and the global apparel supply chain; the path chosen by the industry during this time will set permanent precedent for corporate response to labor rights violations across industries and around the world. The CC’s responsible sourcing approach can give global brands assurance they are using only forced-labor-free products if they are purchasing cotton products from Uzbekistan.

Responsible Sourcing Network and the Cotton Campaign invite apparel brands and retailers to work with us to shape a responsible sourcing approach. Contact us at info@sourcingnetwork.org to mitigate risks, uphold best practices in supply chains, and contribute to the transformation of Uzbekistan.