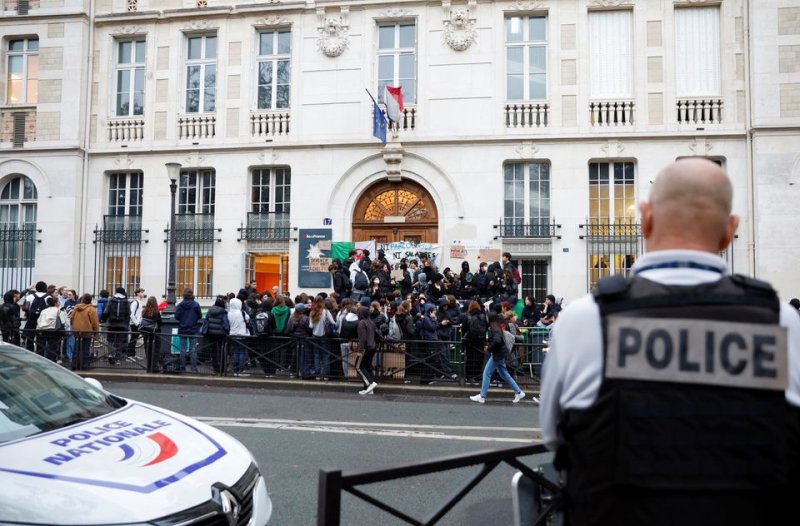 PARIS, Oct 18 (Reuters) - Regional train traffic in France was cut by about half on Tuesday as several unions called a nationwide strike, seeking to capitalise on anger with decades-high inflation to expand a weeks-long industrial action at oil refineries to other sectors.

There were also some disruption to schools, as the strike primarily affected the public sector.

Trade union leaders were hoping workers would be energised by the government's decision to force some of them to go back to work at petrol depots to try and get fuel flowing again, a decision some say put in jeopardy the right to strike.

But a survey by Elabe pollsters for BFM TV showed only 39% of the public backed Tuesday's call for a nationwide strike, while 49% opposed it, and growing numbers opposed the strike by oil refinery workers.

The refinery workers' strike has become one of President Emmanuel Macron's stiffest challenges since his re-election in May.

Government spokesperson Olivier Veran said the requisition of more staff for refineries could occur during the day, as queues of motorists worried about supply disruption grow at petrol stations.

"There will be as many requisitions as deemed necessary ... Blocking refineries, when we have reached an agreement on wages, this is not a normal situation," Veran told France 2 TV.

Just under 10% of high school teachers were on strike on Tuesday, with numbers even lower in primary schools, education ministry data showed. The call for strike was most observed in vocational schools, where teachers oppose planned reforms.

On the transport front, Eurostar said it was cancelling some trains between London and Paris because of the strike.

French public railway operator SNCF said that traffic on regional connections was down 50% but that there were no major disruptions to national lines.

As tensions rise in the euro zone's second-biggest economy, strikes have spilled over into other parts of the energy sector, including nuclear giant EDF (EDF.PA), where maintenance work crucial for Europe's power supply will be delayed.

A representative of the FNME-CGT union on Tuesday said strikes were affecting work at nuclear power plants, including at the Penly plant.

The strikes are happening as the government is set to pass the 2023 budget using special constitutional powers that would allow it to bypass a vote in parliament, Prime Minister Elisabeth Borne said on Sunday.

Demonstrations are scheduled all over the country, with one in Paris from 1200 GMT.

Thousands of people took to the streets of Paris on Sunday to protest against soaring prices. The leader of hard-left La France Insoumise (France Unbowed) party, Jean-Luc Melenchon, marched alongside this year's Nobel Prize winner for Literature, Annie Ernaux.