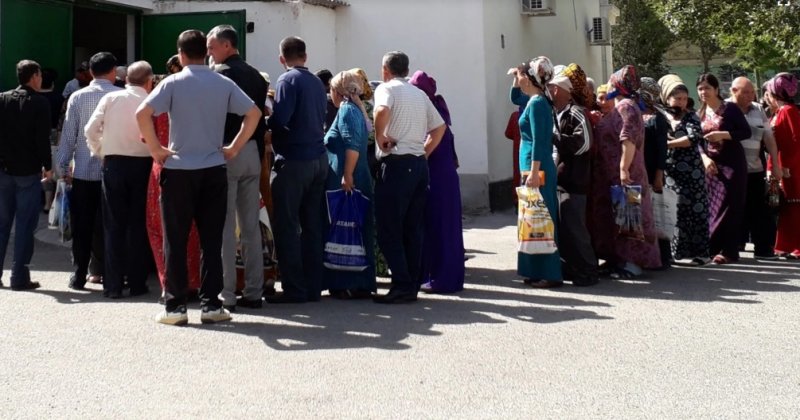 A lifeline for many people in Turkmenistan is about to be cut off, as the family members of Turkmen migrant workers and prisoners will lose access to subsidized food amid growing poverty, inflation, and food shortages in the authoritarian Central Asian country.

The new rule will come into force early next year, several sources familiar with the issue told RFE/RL.

Turkmenistan has increasingly limited its citizens' access to state-owned grocery shops that offer essential foodstuffs at subsidized prices, up to 10 times cheaper than in private stores.

The latest move is expected to negatively affect millions of people in the energy-rich yet impoverished country. The number of Turkmen migrant workers abroad is thought to be around 1 million, most of them working in Turkey.

The country's prison population was estimated to be around 35,000 at the beginning of 2021.

No official announcement has been made by the secretive government in Ashgabat about the upcoming changes or the possible reasons behind them. But regional trade departments have been informed about the plan, the sources said.

In the Farap district of Lebap Province, the instruction was announced to top officials in a meeting on November 18, several people who attended the gathering told RFE/RL.

They said the authorities were still considering adding more categories of people to the list of those who will soon be ineligible to buy the subsidized staples.

One proposal under consideration is to end the right for subsidized food to all but a small group of people, such as the families of active soldiers, war veterans, and others involved in the defense sector, according to the sources.

RFE/RL tried to contact the authorities in Lebap and Ashgabat for comment, but received no response. Officials in the tightly controlled country usually refuse to speak to independent media.

The cash-strapped government has already decreased the amount of food each family is allowed to buy from state stores in the provinces.

For example, a family of seven in Mary Province was allowed to purchase the maximum of 2 liters of cottonseed oil, 2 liters of sunflower oil, and 2 kilograms of sugar per month in state stores. But a new rationing system introduced in March cut that amount in half, several Mary residents said.

The most popular items in the state stores include bread, flour, rice, cooking oil, sugar, eggs, and chicken legs. But the stores often don't get enough supplies, as the country has been in economic turmoil for several years and is facing a severe shortage of food.

Even in the capital, Ashgabat, where the situation is much better than in rural areas, many government stores began a rationing system this year. For example, the most bread allowed for purchase in one day is three loafs per customer.

In the provinces, the amount of food one can buy depends on the number of people registered in a household.

In February, state stores across the country increased the price of foodstuffs, including sugar, cooking oil, and chicken legs, by up to 50 percent.

People often find out about prices rises or new rules and restrictions from shopkeepers. The authorities never announce or acknowledge prices hikes, supply shortages, or any changes in people's access to affordable food.

Turkmen also complain about what they describe as a long list of requirements and painstaking paperwork to become eligible for purchasing food in government stores. For example, those who have utility debts will be disqualified automatically.

In the provinces, residents must register at a local shop every year and are required to present the so-called Household Certificate of Documents and Records that shows the number of people registered in each household along with the size of one's property.

Each member of the family must then provide their passports to be registered. Copies are not accepted, to prevent households from registering family members who are abroad -- like migrants or students -- to be able to get more food