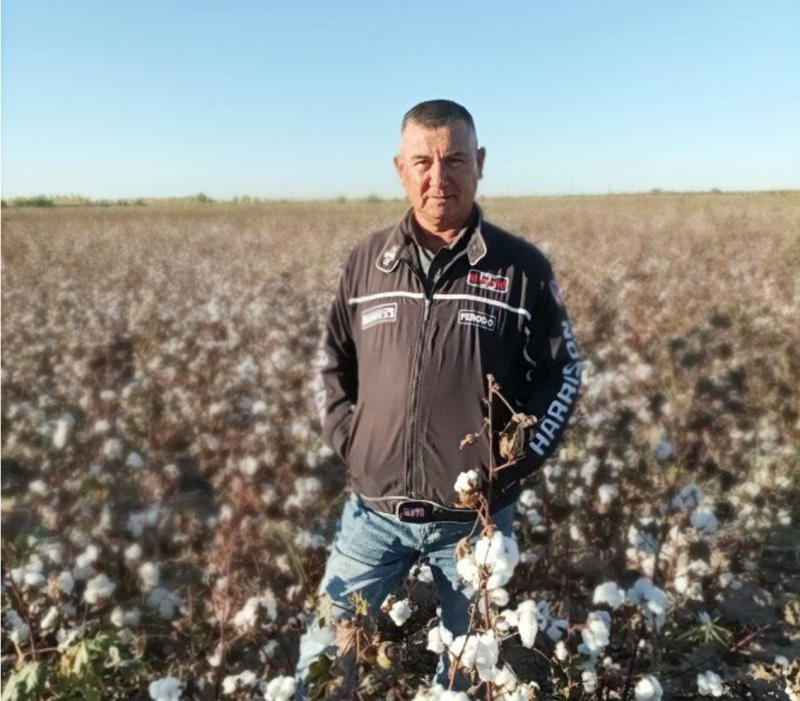 Uzbekistan’s 2022 annual cotton harvest is currently in full swing, with farmers across the country selling their cotton not to the state, as was the case for the past several decades, but to clusters – private enterprises that process cotton into yarn or finished products.

Privatization of the sector in theory should mean the end of state involvement in cotton production, allowing farmers and clusters to develop the sector based on free and fair competition.  90% of Uzbekistan’s cotton is now produced by clusters that contract with local farmers. However, the government still wields significant control over the cotton sector by continuing to set de facto production targets for farmers and forcing them to conclude “futures” (pre-financing) contracts with clusters without a guaranteed price for their cotton. As a result, farmers do not know how much they will be paid and whether they will be able to cover their costs.

Uzbek Forum for Human Rights spoke to Ne’mat Ishchanov, a farmer from Khorezm region, about the problems facing Uzbek farmers. This year Ishchanov has grown 85 tons of cotton at his own expense, without government subsidies, and hopes to negotiate a fair price with the local cluster. He believes that farmers in Uzbekistan should form co-operatives to collectively protect their interests. Recent legislation – including the abolition of state-set quotas for cotton production – give farmers the right to enter into contractual arrangements with clusters and negotiate prices for their produce. In the absence of an independent organization that represents farmers’ interests, Ishchanov also advocates for the establishment of an independent farmers association.

Ne’mat Ishchanov shared his views on what needs to happen to ensure that cotton production becomes a sustainable and profitable business for farmers too:

Until privatization took hold, farmers received preferential loans from the government to pay for fertilizers, seeds, and other inputs. Now, only clusters receive these loans, putting farmers at a distinct market disadvantage. In addition, all ginneries (where cotton fibers are separated from their seeds) and spinning mills (where cotton fibers are spun into yarn) were transferred to private clusters, again creating an unfair advantage by effectively facilitating a monopolistic control over who can use them. As it is forbidden to sell raw cotton in Uzbekistan, farmers are dependent on clusters to access these facilities in order to sell their cotton as fiber. “If these freedoms were given to farmers, clusters would not be able to withstand such competition”, says Ishchanov.

The establishment of cooperatives would in theory allow farmers to access preferential loans, but a further resolution of November 10, 2021, removed preferential loans for cooperatives. This is despite the fact that a previous resolution (No. 4633) states that all benefits granted to clusters would also be granted to cooperatives. It appears therefore, that the state has a clear goal to undermine the independence and therefore profitability of farmers who wish to produce cotton outside of the cluster system.

The result is that farmers’ cooperatives either have to produce their cotton at their own expense or obtain high interest loans from commercial banks which are difficult to access.  This presents a significant entrepreneurial risk not faced by private clusters. In addition, the clusters have the full weight of the state on their side: regional and district officials, representatives of the agro-industry, the Prosecutor’s Office, and Ministry of Internal Affairs work in tandem to ensure that farmers deliver their cotton to the cluster in their district. According to Ishchanov, “Even if you agree to sell to another cluster, they will not allow it and if you agree with the factory belonging to the cluster and say that you will hand over the cotton to them, the permission will not be granted.”

Who sets the price of cotton?

A presidential decree of November 2021 promised “widespread implementation of market principles to ensure the interest of producers and processors” and gave farmers the right to voluntarily enter into futures contracts with any cotton-textile clusters in their region. This was seen as a milestone. The decree was declared following consultations between farmers, the Farmers Council, the Ministry of Agriculture, the Ministry of Justice, and the Cotton-Textile Cluster Association. It appeared fair, transparent and a win-win for all. However, as with many progressive laws in Uzbekistan, the implementation proved to be arbitrary or simply ignored.

When contracting began in March 2022, instead of concluding futures contracts, farmers were summoned to administration buildings where they were forced to sign blank contracts without prices. The Ministry of Internal Affairs and the Prosecutor’s Office applied sufficient pressure to ensure that clusters were able to secure contracts without any obligation to guarantee a minimum price. “Hokims [local officials] played a big role in making these futures contracts illegal. They cheated the farmers“, says Ishchanov.

Many farmers understandably feel betrayed by local officials for failing to implement the law on futures contracts. Clusters have refused to give farmers a copy of their contracts even though the 2022 harvest is now underway. When farmers ask local officials how much they can expect to be paid, they receive no answer.

On September 29, 2022, the Farmers’ Council wrote to the Prosecutor’s Office and the Ministry of Agriculture and shared the findings of a survey the Farmers’ Council had conducted that confirmed that several hundred farmers in all areas of the country did not have copies of futures contracts with clusters for the supply of cotton, a violation of the law. The Farmers’ Council requested that the Ministry of Justice and the Prosecutor’s Office ensured that farmers have contracts signed by both parties. At the time of writing, there has not yet been a response.

In the meantime, farmers have threatened not to deliver their cotton unless they are given a fair, guaranteed price and the peace of mind that they will at least break even. The knock-on effect of such action would have a devastating effect on rural communities as well as the textile industry itself, in which the Uzbek government has invested billions of dollars.

“Allocation” or Persistence of state-set quotas

If the freedoms promised in Resolution No. 4633 were actually implemented, farmers would be able to choose what products they cultivate. Instead, officials continue to dictate state-set quotas, including for cotton, whether the land of the farmer is suited to the product or not. The principles of the command economy are alive and well, the only difference being that private companies, and not farmers, are reaping the profits. The continued practice of allocating quotas for agricultural products reveals why the establishment of cooperatives has a disruptive effect and why local officials are doing everything they can to undermine them: cooperatives are outside of the “allocation system”, meaning that quotas and production targets become skewed. Preventing cooperative farms from operating is an attempt to preserve the command system which retains considerable control by the state.

In 2022, the government forced farmers to plant potatoes and soya beans at their own expense, in accordance with the allocation system and regardless of the suitability of their land. The result was unsurprisingly disastrous. But local officials were able to demonstrate to their superiors that state-set quotas had been fulfilled and that they had contributed to the food security of the country. According to Ishchanov, the plight of farmers is of no interest to anyone.

Lack of representation of farmers’ interests

Ishchanov says, “That is why they cannot solve our problems. Therefore, we have plans to organize an alternative to this Farmers’ Council using the freedoms established by law. The Ministry of Justice should help us here. I hope that if the Presidential Administration supports us, everything will be fine.”

At the time of writing, 60% of the annual cotton harvest in Uzbekistan has been completed. Whether farmers will make a profit from the cotton they produced will depend very much on the benevolence of clusters.