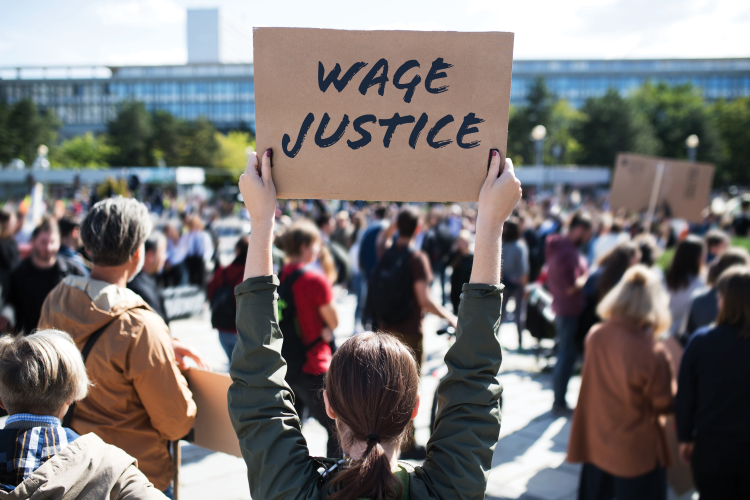 Rampant inflation, driven by profit-gouging by powerful corporations that control energy, transport, food and other vital commodities is sending yet more workers and their families into poverty.

More than half of households are struggling to get by and 10% are unable to meet the cost of essentials.

The COVID-19 pandemic and Russia’s invasion of Ukraine have had dramatic impacts on supply of goods, and corporate profiteering from these crises continues unchecked.

This comes on top of a decades-long decline in the share of prosperity going to working people as suppression of union activity, in particular collective bargaining, meant that workers were already getting less that they were due.

Minimum wages in most countries are inadequate, leading these workers to continue to lose ground.

Wage justice is a cornerstone of the social contract between workers, governments and employers that has been broken in the interests of corporate greed.

573 new billionaires have emerged since the start of the pandemic. They now control 13.9% of global GDP while every day more than 700,000 more people fall into poverty.

The fracture of the social contract through deliberate decisions by governments threatens democracy itself as anti-union repression and failure to ensure fair labour laws reach new heights.

This is reinforced by the myth peddled by some economists and central bankers, as well as conservative politicians and media, that inflation is somehow the fault of working people and that any increases in people’s incomes would be bad for the economy. That is simply untrue: inflation in the few remaining countries that have automatic wage indexation is around the same levels as comparable countries that have not raised wages.

Workers in every part of the world have been left with no option but to go on strike to demand action to bridge the wages gap in the face of rampant inflation that is depriving households and communities of any chance of a decent life and a decent future.

Many of them face violent repression by governments beholden to corporate interests, or the threat and reality of losing their jobs.

The global trade union movement stands united for wage justice for all workers, formal and informal, wherever they live and whatever work they do.

The intersecting crises of global heating, armed conflict and corporate greed must become a turning point, where governments accept that they have to govern in the interests of people and no longer pander to the power of corporate elites.

The world needs a new social contract, with wage justice at its heart. The global deficit of 575 million jobs must be closed, fundamental workers’ rights must be respected, discrimination must be replaced by equality, social protection must be extended to all and an inclusive world economy, unchained from the vestiges of colonialism, must be built.

Upon those foundations, peace can be built and the pressing challenges of today and the future can be met and overcome.