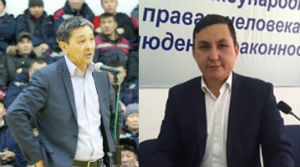 Recently, the authorities of Kazakhstan have launched large-scale repression against the leaders and activists of the independent trade unions of the Mangistau region, in the west of the country.

The local authorities and the management of the oil service company OCC attempted to suppress a peaceful mass protest by the workers in January. The chairman of the OCC workers trade union, Amin Yeleusinov, and labour inspector Nurbek Kushakbayev were arrested on 20 January.

Later, on 7 April Kushakbayev was prosecuted through the repressive Criminal Code adopted in 2014. On 7 April the court of Astana sentenced him to two and a half years in a corrective labour colony for his appeals to strike. The judge has also satisfied the OCC’s demand to collect KZT 25 million (US $80,000) from Kushakbayev for alleged harm caused to the company. At the same time, the OCC management started mass layoffs of employees who participated in the protests.

Take part in a campaign