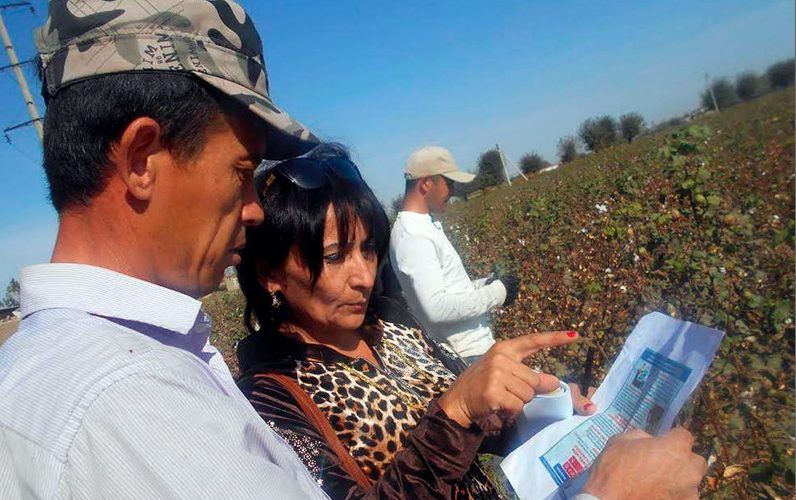 On November 12, Uzbek police raided the home of human rights activist Malokhat Eshonkulova and confiscated some of her belongings, including electric heaters, in a nearly 11-hour search for her computer and cell phone. Malokhat is being targeted for her work monitoring forced and child labor in Uzbekistan’s government-run cotton harvest.1

Despite the Uzbek President and Prime Minister’s recent public statements meant to demonstrate progress on addressing forced labor, the Uzbek authorities have imposed $1400 in fines on Malokhat in retaliation for raising complaints about forced labor. If they are not paid, all of her belongings may be confiscated and sold.

In an attempt to clamp down on dissent, the authorities are using an antiquated registry permit system from Soviet times to threaten Malokhat with internal deportation from the capital region of Tashkent, where she lives with her family, to a remote region of the country.

Malokhat’s work and voice to illuminate human rights violations in Uzbekistan’s cotton industry must not be silenced.

Malokhat, along with her fellow activist Elena Urlaeva, was repeatedly arrested and harassed by Uzbek authorities for their attempt to document forced labor and human rights abuses throughout the 2016 and 2017 cotton harvests. They were accused of espionage, insulted, exposed to repeated searches — even forced to strip naked.2

In March, Elena was detained in an institute and forced to undergo unnecessary psychiatric “treatment” for 23 days. We launched a campaign in partnership with Cotton Campaign to bring attention to Elena’s plight, helping to secure her release.3

We want the power of international solidarity to help Malokhat in the same way! Please join us in supporting her as she fights this harassment!

Uzbekistan is the fifth largest cotton producer in the world and each year forces more than one million of its citizens to grow and harvest cotton to meet national quotas. Citizens are mobilized in mass and forced to work under the threat of fines, job loss, school expulsion, criminal charges and loss of social security benefits.4 The industry “generates more than US$1 billion in annual revenue that goes into an opaque extra-budgetary account not open to public scrutiny and controlled by high-level government officials.”5

We cannot allow the Uzbek government to persecute brave individuals like Malokhat to cover up its crimes! Stand up now to protect Malokhat and demand these baseless charges are dropped!

TAKE PART IN A CAMPAIGN