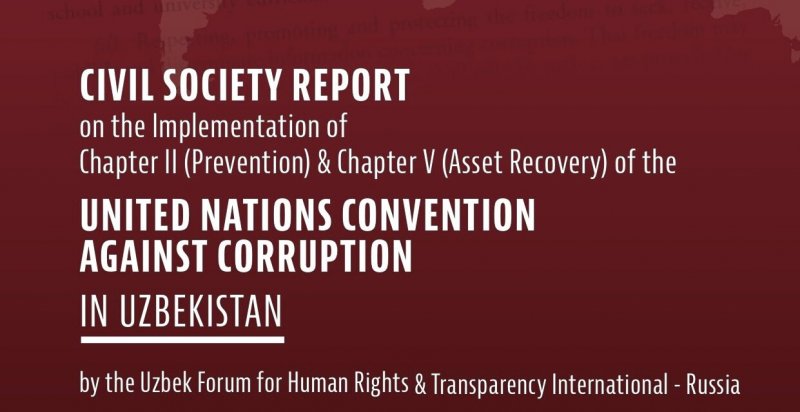 Uzbekistan has enacted significant reforms in recent years to enhance its legislative framework with regard to implementing Chapter II (preventive measures) of the UN Convention Against Corruption (UNCAC). However, widespread nepotism, political interference in key institutions, and impunity for crimes of corruption obstruct the implementation of these reforms in practice. Moreover, greater transparency and civil society involvement in the asset recovery process (UNCAC Chapter V) – including in the ongoing return proceedings of Gulnara Karimova’s ill-gotten assets – are urgently needed. These are some of the key findings of a new report on UNCAC implementation in Uzbekistan, authored by the Uzbek Forum for Human Rights and Transparency International – Russia with technical and financial support from the UNCAC Coalition, which is intended as a contribution to the UNCAC implementation review process in its second cycle.

The report outlines how, despite efforts to increase transparency and accountability in public procurement and public sector hiring, gaps in legislation and a lack of enforcement hinder genuine progress in these areas. Access to Information (ATI) remains another key challenge, as information requests are often refused or ignored by public authorities and judicial challenges to such refusals tend to be ineffective. Furthermore, loopholes in anti-money laundering regulations – such as the absence of a definition of ‘public official’ – and the failure to conduct due diligence checks pose great corruption risks that must be urgently addressed.

The ongoing second cycle UNCAC review in Uzbekistan was scheduled to begin in 2019. However, the country visit by the two reviewing states, Nigeria and the Maldives, was not conducted due to Covid-19 restrictions, and is still pending. Neither the schedule of the review process nor the self-assessment checklist was made publicly available. When completing the self-assessment checklist, the Corruption Prevention Agency of Uzbekistan (ACA) – the focal point of the review – only liaised with government-controlled organizations (so-called GONGOs), but did not consult any independent civil society organizations (CSOs). The review documents will be available on Uzbekistan’s UNODC country profile page once they are finalized.

The following are some of the report’s main findings:

ACA is the country’s main anti-corruption institution and responsible for coordinating all public bodies’ efforts in this area. Besides developing anti-corruption policies and monitoring their implementation, ACA also processes citizens’ complaints on corruption and has the power to issue warrants and warnings to government bodies to prevent corrupt conduct. However, the Agency lacks the coercive power to enforce its warnings. Moreover, the fact that the Director of ACA is directly appointed by the Office of the President is just one of many examples that highlights the political influence that the Executive yields over the agency. Thus, while ACA is a duly established public authority without any signs of inherent corruption, it lacks urgently needed enforcement powers, as well as genuine political independence.

Although Uzbekistan’s civil service employment has made significant progress with respect to its transparency, accessibility, and funding, nepotism remains widespread. While some Ministries and government agencies have started to publish vacancy notices for low-level positions on their website, promotions to senior positions often seem to be based on political loyalty rather than merit. Furthermore, no detailed code of conduct for civil servants exists, apart from general rules to exercise their powers in good faith and to resist undue influence.

Under a 2021 Presidential Decree, the ACA can issue warrants for the suspension of activities that may constitute a conflict of interest. However, several high-profile cases suggest that the enforcement of conflicts of interest rules remains ineffective. For example, the mayor of Tashkent awarded dozens of contracts to companies he beneficially owns. Furthermore, there is no asset declaration system for public officials in Uzbekistan, although a 2021 Presidential Decree decided that such a system must be established in 2022. Worryingly, however, the President and MPs would not be subject to the proposed system since they are not considered to be public servants.

The Uzbek Election Code of 2019 forbids any private funding for campaigning, both for parties and for independent candidates. Political candidates are thus wholly dependent on government funding and cannot rely on their supporters’ funding, which severely undermines genuine political competition in the country. According to a 2019 OECD assessment, government funding for elections is only sufficient to cover basic campaigning needs.

Political parties must submit annual financial reports on their income and spending while government funding must be declared separately. These reports are subject to audit by the Accounting Chamber of Uzbekistan and should be published on the respective party’s website. However, the vast majority of parties does not publish their financial reports, which hinders any transparent overview of who donated to a particular party and for which purposes the money was spent.

In recent years, Uzbekistan has initiated significant reforms in the area of public procurement, which emphasize the importance of transparency and civil society oversight, prohibits conflicts of interest and requires all bids for public contracts to be published online and for bidders to disclose their beneficiaries. In practice, however, these rules are often circumvented or simply not enforced. For example, the Orient Group, which is partly owned by a member of the President’s extended family has received a significant number of unpublished contracts with the National Railways and has a nearly exclusive investment relationship with the state-owned Uzbek Oman Investment Company.

It further appears that the designated oversight bodies lack political support to suspend suspicious procurements. For example, ACA recalled its own warrant to stop bidding with regard to public shares in the local Coca Cola branch, which appeared to be the result of political pressure.

The Uzbek authorities do not engage with independent civil society organizations on anti-corruption issues and instead use so-called GONGOs to mimic genuine civil society participation. A further obstacle to the participation of civil society is the highly bureaucratic and burdensome registration process for NGOs. The Ministry of Justice (MoJ) has rejected the applications of civil society groups as many as 20 times, mostly on spurious grounds. Moreover, any foreign grant exceeding USD 2,000 requires the MoJ’s approval which constitutes a serious restriction on NGOs’ funding opportunities.

Nevertheless, citizens have formed several informal groups that work to combat illegal construction and land seizure, while a nascent scene of independent journalists, media outlets and bloggers have repeatedly reported on cases of corruption. While the government has taken action on some corruption cases disclosed by journalists and citizen initiatives, there is no structured cooperation with these groups and activists. At times, independent media reporting is also met with severe government repression. For example, in May 2021, blogger Otabek Sattoriy was sentenced to six and a half years in prison on fabricated charges after reporting on the involvement of officials in forced evictions.

Uzbekistan’s legal framework to combat money laundering establishes a Financial Intelligence Unit (FIU) and limits the use of cash in commercial trade to USD 25,300 per contract. However, the law fails to define clear risk criteria for suspicious transactions and lacks a definition of ‘public official’, so that – contrary to FATF recommendations – the latter’s transactions do not come under special scrutiny. Research further suggests that intermediaries as well as the FIU are not persistent in implementing anti-money laundering regulations.

Uzbekistan is currently in the process of recovering the ill-gotten assets of the former president’s daughter, Gulnara Karimova, – worth an estimated USD 1,3bn – from Switzerland and other Western jurisdictions.  Although an initial Memorandum of Understanding between Switzerland and Uzbekistan pledged to conduct the return process in a transparent and civil society-inclusive manner, the negotiations and return process have since been shrouded in secrecy. Given the poor enforcement of anti-corruption laws in Uzbekistan, the return process and the management of the repatriated assets must be subject to transparent oversight with the active participation of civil society.

Furthermore, although Uzbekistan has mainly been an ‘origin’ rather than a ‘destination’ country when it comes to asset recovery, recent reports suggest that members of the South African Gupta family have been laundering assets through Uzbekistan. In this regard, Uzbekistan must urgently reform its legal framework to allow foreign governments to request the confiscation and return of stolen assets and designate an institution that will be responsible for handling such requests.

The report makes several key recommendations to decision-makers to address the challenges outlined above and advance UNCAC implementation in Uzbekistan: