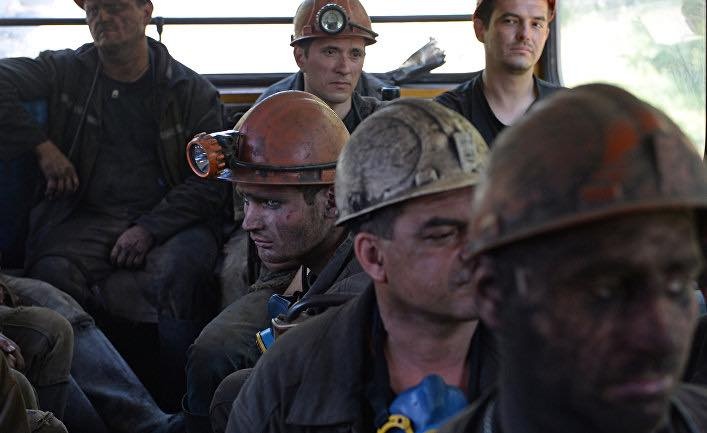 After a series of local protests, both over- and underground, the Independent Trade Union of Miners of Ukraine (NPGU) is calling on members from all over the country to join an indefinite protest in Kiev to demand payment of wage arrears to workers of state-owned coal mines and proper financing of the sector. Unless authorities immediately eliminate the wage arrears, the protest will start on 16 December.

Large wage arrears at state-owned coal mines have again triggered local protests. On 2 December, 90 miners in the Almazna mine in Dobropolye, stayed underground after their shift ended, demanding payment of wages since October.

After negotiations with company management, the miners got up to the surface and wages were partially paid the following day. However, the debt remained, causing more protests with workers refusing to enter the mine. A few days later, mine drivers joined the protest.

In Lviv, 32 miners at the Chervonogradskaya mine remained underground on 7-8 December, demanding wages owed since July. Miners from other mines that belong to the same company have joined the protest on the surface, and the protest is continuing. Their demands also include increasing tariff rates in accordance with current legislation and industry agreement, and setting an objective price for coal.

Following the protests, most state-owned coal mines received budget funds on 9 December and partially paid wage arrears to miners, totalling UAH335,8 million (US$12.4 million). However, remaining wage arrears still exceed UAH2 billion (US$74.3 million).
According to NPGU chair Mikhailo Volynets, who is a member of parliament, despite requests to increase the 2022 state budget and allocate sufficient funds for the coal mining industry, the ruling party again approved low figures.

“The state budget for 2021 had no funds for health and safety measures. There is a shortage of portable self-contained rescue devices; at Lisichanskugol they amount to 51.5 percent, and at Pervomaiskugol to only 40.1 percent of the required amount, as well as a shortage of rechargeable lamps. State-owned mining companies mostly failed to complete the required OHS training,"

In addition, underfunding of the industry has led to poorer health and safety at state-owned coal mines. This year, the injury rate has increased by 22.8 percent compared to last year and eight coal miners have died at work.

“It is shameful that miners, who earn a living in hazardous conditions, are only paid three or four times a year, instead of monthly. This must be rectified immediately, with the state budget allocating funds, ensuring timely wage payment and proper health and safety measures,”