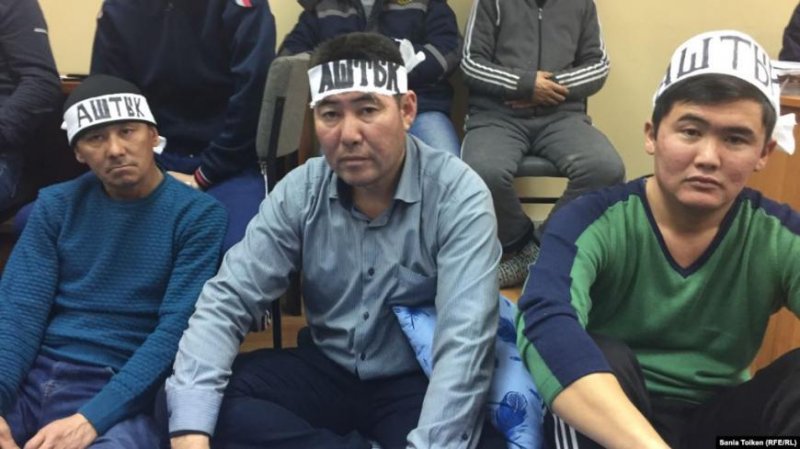 (Berlin) – The Kazakhstan authorities’ attempt to have an independent trade union’s operations suspended is a violation of workers’ fundamental rights to organize and associate, Human Rights Watch said today. On February 1, 2021, a Shymkent court is scheduled to resume consideration of the Shymkent City Administration’s lawsuit against the Industrial Trade Union of Fuel and Energy Workers (ITUFEW) claiming violations of Kazakhstan’s trade union law.

“This brazen attempt to have the activities of an independent trade union suspended is unjustified and should be stopped in its tracks,” said Mihra Rittmann, senior Central Asia researcher at Human Rights Watch. “Less than a year ago Kazakhstan took necessary steps to amend its highly restrictive 2014 trade union law, but now the authorities are cracking down on yet another independent trade union.”

The lawsuit filed against an independent industrial trade union representing workers in Kazakhstan’s oil and gas sector claims that the union violated registration provisions in the trade union law. The lawsuit contends that the union did not “introduce all the necessary changes to its founding documents,” nor “complied with the requirements in Article 13 parts 2 and 3 of the Trade Union Law.”

These claims are unsubstantiated or based on legal provisions that either no longer exist or do not apply to ITUFEW, Human Rights Watch said.

ITUFEW was registered by Kazakhstan’s Justice Ministry in November 2015, after the Trade Union Law was adopted in 2014. The law required existing trade unions to change their charters under “Transitional Provisions” in art. 33. But this provision does not apply to trade unions that, like ITUFEW, were registered after the law entered into force. The Shymkent City Administration’s claim that ITUFEW did not introduce changes to their founding documents thus has no basis, Human Rights Watch said. In addition, the lawsuit refers to trade union law provisions that pertain to the registration of territorial and national-tier, or “republican” trade unions, which have no bearing on an industrial trade union’s legal standing.

As such, there can be no violation of art. 13, part 3 since higher-tier affiliation is no longer mandatory in law, Human Rights Watch said.

The lawsuit also claims that the union violated art. 13, part 2, but provides no further information to substantiate its claim. Art. 13, part 2 requires that industrial trade unions “have structural subdivisions and (or) affiliated organizations in … more than half of the number of regions, cities of republican significance, and the capital.”

After the government repeatedly denied registration to the Confederation of Independent Trade Unions of Kazakhstan (KNPRK), a court ordered it closed in January 2017. In the years since, the authorities have pursued politically motivated criminal prosecutions against KNPRK-affiliated trade union leaders, including Erlan Baltabay, the former ITUFEW chair, in 2019.

In May 2020, Kazakhstan finally introduced amendments to its restrictive trade union law that make the registration process more straightforward and lift the mandatory affiliation requirement.

While the amendments did much to address longstanding criticism from the International Labour Organisation, the European Union, and the International Trade Union Confederation regarding the restrictive space for trade union organizing in Kazakhstan, this case against ITUFEW makes clear that Kazakh authorities still have much more to do to ensure that trade unions in Kazakhstan can work freely and without fear of harassment or forced suspension.

The Kazakh authorities should drop the case against ITUFEW and allow independent trade unions to register and operate in line with international labor standards ratified by Kazakhstan, Human Rights Watch said.

“The improvements to the trade union law are nothing but lip service if Kazakh authorities are still trying to paralyze independent trade unions in practice,” Rittmann said. “The Shymkent City Administration should immediately withdraw its claim against ITUFEW, and the authorities should create an environment in which trade unions can work without fear.”