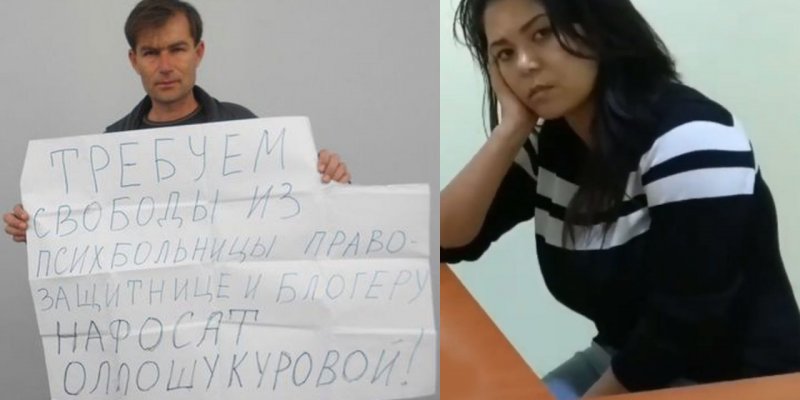 On August 5, 2021, the Supreme Court of Uzbekistan confirmed the rulings of a district and regional court that David Bagmanyan, a 42-year-old former entrepreneur from the small town of Akhangaran, was mentally incompetent.

Bagmanyan had no history of mental health problems. Beginning in 2018, he had been battling to save his property from demolition by the Akhangaran city hokimiyat (administrative authorities). He was determined to save two residential homes belonging to his family and a store where he had conducted his business for the past eight years. Bagmanyan’s efforts however were in vain and, according to Bagmanyan, the properties, were demolished without prior agreement or compensation for loss of property or income from his business. His repeated attempts to secure justice were consistently ignored by the authorities who appear to have resorted to the most extreme means to silence him.

On May 23, 2019, Bagmanyan was forcibly detained in a psychiatric hospital for one month, but not through referral by a medical professional. The procedure to have him hospitalized was initiated by the local hokimiyat (administration) of the city of Akhangaran, in an apparent attempt to stop Bagmanyan’s efforts to confront state abuse.

The situation became even more precarious after his release. In June 2019, a civil court upheld a claim that Bagmanyan was mentally incompetent, again submitted not by doctors, but by the Akhangaran city hokimiyat. The hokimiyat claimed that Bagmanyan’s complaints relating to the demolition of his property amounted to “unsubstantiated statements and slander”, and that “Bagmanyan creates irritation and an unhealthy environment in society”.

These appear to be the grounds for the hokimiyat to request that Bagmanyan be declared incompetent and sent for compulsory psychiatric treatment, despite the fact that he had a certificate from the Psychoneurological Clinic in Akhangaran city dated 11 April 2019 confirming there were no records that he suffered from any mental illness. Nonetheless, a psychiatric examination report of 23 May 2019 states that Bagmanyan suffered from a “mental illness in the form of paranoid schizophrenia.”

Article 30 of Uzbekistan’s civil code states that, “A citizen who, due to a mental disorder (mental illness or dementia) cannot understand the meaning of his actions or control them, may be declared by a court to be legally incapable in the manner prescribed by law, and guardianship is established over him.” In effect, this means they are no longer able to hold a bank account, sign contracts, own property or submit appeals to courts. It is tantamount to erasing the legitimacy of the individual.

Bagmanyan says he still does not understand how his actions could have led to such a diagnosis, other than the numerous complaints he had written to various state agencies in defense of his property rights. “The hokimiyat first deprived me of my private property and all sources of income. Then, to cover up the first crime, the city authorities went to court to declare me mentally ill to silence me and justify the reason for ignoring my complaints,” Bagmanyan told Uzbek Forum.

A new report by Uzbek Forum for Human Rights, describes how human rights defenders and civil society activists are still at risk of this abusive practice in Uzbekistan. The report covers six cases between 2001 and 2019, although others are known and likely many more have gone unreported, even under the reforming administration of President Shavkat Mirziyoyev. The victims in these cases were forcibly committed to psychiatric institutions often immediately after exercising their political rights to either protest or petition their government for reform.

There are numerous ways in which critical voices can be crushed, but none quite so cruel as declaring a person mentally insane without medical grounds. From the moment of their detention, victims are no longer heard, have no judicial recourse, no access to medical records or the prescribed treatment they are forced to undergo, including the use of powerful medications which can have long lasting negative side effects.

Once admitted to a psychiatric clinic, victims are out of reach of third parties or family members and extremely vulnerable to abuse. Justifications for declaring someone mentally unfit does not even require psychiatric appraisal which can also be withheld from the patient and family members. Not even appeals to the courts can force the disclosure of the grounds on which someone is being held – often indefinitely – in closed psychiatric wards.

Moreover, doctors and officials who order detention are able to evade accountability for abuse because victim testimony is less likely to be considered credible. If a person has been declared mentally insane, reports of abuse are less likely to be taken seriously, much less reported to authorities who would be willing to investigate.

Veteran human rights defender, Elena Urlaeva of the Human Rights Alliance of Uzbekistan, has suffered not once, but no less than 18 times at the hands of doctors and officials who sought to silence her for good by committing her to forced psychiatric detention. Urlaeva has campaigned for years against the use of child and adult forced labor in the country’s cotton sector and has conducted monitoring for Uzbek Forum and the International Labour Organization (ILO). In one instance, she was detained prior to a meeting with representatives of the ILO and the World Bank. The brutality of her periods of detention, including being tied to her bed for hours at a time and forcibly administered powerful drugs, displays a malevolence that contaminates the very notion of psychiatric treatment and demonstrates the impunity of those who exploit it for political ends. Undeterred, Urlaeva continues to monitor human rights violations in Uzbekistan, but no-one has ever been held accountable for her periods of detention and she has never been able to revoke her status as “mentally incompetent”.

Blogger and activist, Nafosat Ollashukurova, fled the country after being held in a psychiatric institution for three months in 2019. The blogger, who often reported on corruption and illegal demolitions in Uzbekistan, had been filming a peaceful protest prior to her detention. According to a court decision, a psychiatrist testified that Ollashukurova, who had never suffered from any kind of mental illness, exhibited symptoms of “mental disorder,” “signs of psychopathic syndrome,” and “paranoid syndrome.” Following her release, Ollashukurova said that a regional police official had threatened her that if she ever spoke publicly about her mistreatment, they would make sure she became mentally ill for real and stay in a psychiatric hospital forever.” Ollashukurova now lives abroad where she has applied for political asylum.

Punitive psychiatric detention is a violation of Uzbekistan’s numerous international treaty obligations and is a form of torture as defined in Article 1 of the Convention Against Torture. Despite a change to the law on Psychiatric Care this year, Uzbekistan’s criminal code does not criminalize torture if it is committed in a hospital setting. Uzbekistan should therefore not only prohibit torture in all settings, including psychiatric hospitals, but amend its criminal code to make clear that torture includes forced psychiatric treatment.