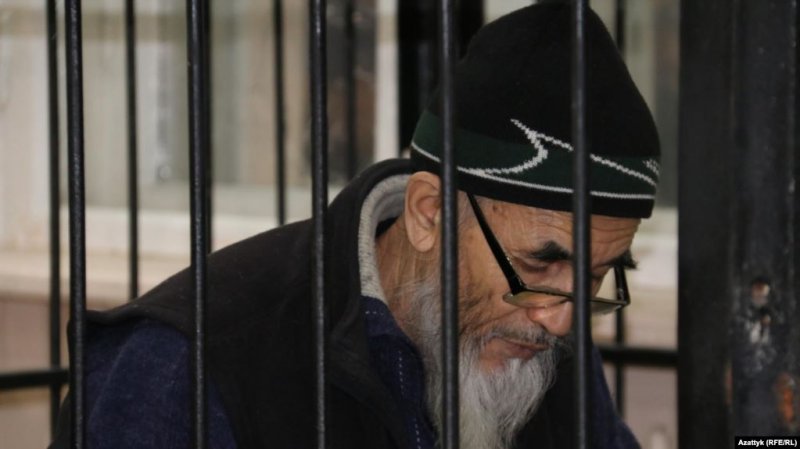 Today, on 13 May 2020, from 2:00 p.m. to 5:10 p.m., the Supreme Court of the Kyrgyz Republic examined the cassation appeal of human rights activist Azimzhan Askarov, in which he requested to cancel the sentence of the Chui Oblast Court dated 24 January 2017, comply with the Views of the UN Human Rights Committee, end the criminal prosecution and release him from custody.

Atmosphere before the hearing and in the courtroom:

Prior to the trial, the defense side was subjected to pressure and threats of aggressive groups both outside the building of the Supreme Court of the Kyrgyz Republic and in the courtroom. They insulted and threatened the lawyers, the wife of Askarov, Khadicha Askarova, and employees of Bir Duino-Kyrgyzstan, using hate speech and discrimination.

We contacted the Ombudsman Institution of the Kyrgyz Republic twice regarding the provision of observers for the trial and calling a police squad due to the growing number of threats. The police officers who arrived did not take any measures against aggressive persons who violated the order in court. The police simply watched people insulting and threatening to burn and kill the defenders of Azimzhan Askarov.

Judicial trial: presided by judge B.J. Akmatov; judges: K.B. Toktomambetov, A.Sh. Sydykov. The only action of the presiding judge in relation to the aggressive statements and disorder in the court room was a warning of removal from the courtroom. The behavior of the presiding judge was puzzling when he instructed to bring some water from a meeting room to the victim’s legal representative, A. Suleimanova, who went into hysterics, whereas no measures were taken in relation to the repeated violations in the court room.

Public insults of Askarov’s lawyers and his spouse took place before the trial, during the adjournment of the trial. The sister of the deceased policeman made open threats, she went up to Askarov’s wife and said: “Why do you go to court, pay the lawyers and human rights defenders (pointing at public defender Ismailova)? Come to me... Let's talk... The fate of your husband is in my hands.” The police and employees of the Supreme Court of the Kyrgyz Republic silently listened and watched her say that...

Having approached one of the lawyers, Aigul Sulaimanova, the sister of the murdered policeman shouted: “Ay sart (insulting), you know that if Askarov is released, I will kill you in this room,” she repeated to Ismailova: “if Askarov is released, I’ll settle your hash in this room.” They shouted that Tolekan was an agent, that she was corrupt and did not serve the Kyrgyz people, that she was a traitor and Askarov’s lover. Threats and insults were made against all the employees of Bir Duino-Kyrgyzstan who monitored the process inside and outside the Supreme Court building. Unknown young people who were admitted to the Supreme Court filmed the defenders of Azimzhan Askarov using their mobile phones. When they were asked, “Who are you and why are you filming?”, they answered, “I'm from Osh...”.

The presiding judge interrupted the lawyer V. Vakhitov several times with his remarks, without delving into the essence of his arguments.

After the deliberation, the court announced only the operative part of its decision, upholding the sentences of the previous courts, without explaining the reasons for the decision.

The prosecution: prosecutors Altybaeva, Orozbek Uulu, without delving into the Views of the UN Human Rights Committee, ignoring the arguments of the defense of Askarov, as was done previously by the Chui Oblast Court, ignored the gross violations of human rights.

Bir Duino-Kyrgyzstan has an audio recording of the trial.

We continue to believe in the humanity and justice of the Kyrgyz authorities towards the prisoner of conscience, human rights activist Askarov,

as well as prisoners with special needs during the pandemic, we hope for their release and real reform of the judicial system of the Kyrgyz Republic.