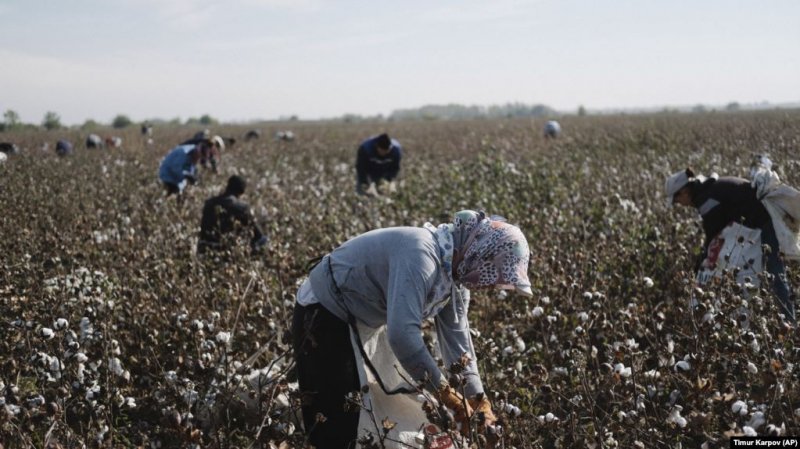 Reports from Uzbekistan contradict the government's claim that it has phased out its internationally-criticized policy of forcing citizens into farm fields to pick cotton every autumn.

Under pressure from the Cotton Campaign, a worldwide coalition of human rights groups and businesses boycotting Uzbek cotton since 2010 over the use of child- and forced-labor in the country, officials in Tashkent say they have ended the practice.

But recent complaints heard by RFE/RL from hundreds of Uzbeks around the country reveal that forced labor is continuing in Uzbekistan's cotton sector under the guise of "volunteer" work.

Rather than ending forced labor, local Uzbek authorities try to make the work appear as if it is "voluntary."

Those pressured to do the grueling labor say they are being forced to sign letters declaring they are "voluntarily" picking cotton for a wage of about $0.10 per kilogram.

That nets the fastest and hardest working cotton pickers about one dollar a day in a country where the minimum monthly salary for menial workers is about $300.

The paltry payments are being dressed up by authorities in Tashkent as an "employment opportunity" for the jobless and needy families.

Uzbek Deputy Minister of Employment and Labor Bahodir Umrzakov said on September 5 that the harvest this year is dominated by poor families, unemployed people, and single mothers listed as "individuals in need."

"A contract is signed with the picker," Umrzakov said. "Before signing the contract, the citizen determines how long they will participate in the harvest. If they want, it will last a month or 10 days."

In reality, the wages earned in six full days by Uzbekistan's fastest cotton pickers is just enough to buy one kilogram of beef.

Those who don't work at top speed often go into debt during the two-month stints they say they're being forced to work in the fields. That's because the cost of the meals they eat during the harvest is deducted from the meager compensation they receive for their work.

In Uzbek President Shavkat Mirziyoev's native Jizzakh region, there are reports that single mothers and women from impoverished families take their babies with them.

There also are allegations that some owners of private "cluster farms" benefiting from Uzbekistan's forced-labor practices have links to senior officials in Tashkent -- including relatives of Mirziyoev.

This year, it's not only state employees who face the threat of being fired from their jobs if they refuse to do the back-breaking work.

Local administrators -- with prosecutors, police, and tax authorities on their side – are also pressuring private companies to provide "volunteers" to pick cotton.

Faced with the possibility of stricter checks on their businesses if they don't comply, managers of those firms sign letters declaring they are "donating" their workers to the harvest "for the good of the motherland."

With Uzbekistan's 2020 cotton-harvesting campaign in its second week, employees of state banks and the Emergency Situations Ministry say they also are being pressured to pick cotton.

On September 14, an official from the Andijan Regional Emergency Management Agency told RFE/RL that he and others from his regional branch had been sent to Kashkadarya to pick cotton.

Another ministry employee, who did not want to be named for fear of being fired, said he and his colleagues were forced to sign statements declaring they had "voluntarily gone out to pick cotton."

"I was forced to go to the cotton fields against my own free will," the ministry employee told RFE/RL. "They said if you don't want to go to pick cotton, find someone instead" and pay them a monthly salary of $300, he said. "We can't afford it."

Emergency departments in other regions of Uzbekistan have also been mobilizing so-called "volunteer" groups for this year's harvest.

An Emergency Situations Ministry official in Tashkent told RFE/RL that he was unaware anyone was being "forced" to do the work.

But that official, speaking on condition of anonymity, told RFE/RL that exactly 140 ministry employees from each province and from the ministry's headquarters in Tashkent had "volunteered" to pick cotton this year.

"They go voluntarily," the official claimed. "No one is forcing them to do so."

Komala Ramachandra, a researcher for Human Rights Watch, said Uzbekistan appears to have made "important strides" in reducing the use of forced labor in its cotton sector.

But Ramachandra said the central government in Tashkent "continues to be involved in mobilizing employees of public institutions and enterprises to work on cotton farms."

She said those who are being pressured fear they'll lose their jobs and social benefits, or face other reprisals, if they refuse to go into the fields.

She noted that a nongovernmental rights group called Uzbek Forum has also obtained official documents showing that the labor mobilization continues "to be directed by authorities" or is "the result of government policy."

RFE/RL has found that employees of state-owned banks and other state-funded agencies are among those being pressured to harvest Uzbekistan's cotton crop in 2020.

An employee at a branch of the People's Bank in the Ak-Altyn district of the Syrdarya region told RFE/RL's Uzbek Service that he was warned he would lose his job if refused to pick cotton or pay somebody else to take his place in the fields.

"We are appealing on behalf of the People's Bank," that employee told RFE/RL on condition of anonymity because he risked dismissal. "We have started cotton picking. A group of workers is already out in the fields. Either they are sweating cotton, they will be fired, or they have been fired."

Employees of HamkorBank and Savdogarbank in the Syrdarya region also told RFE/RL that they would be fired if they refused to pick cotton this year.

Managers of those banks could not be reached by RFE/RL for comment.

Meanwhile, rights activists warn of a public health threat from the coronavirus pandemic due to the crowded and unhygienic living conditions that many Uzbek forced laborers must endure.

"Hundreds of people live in barracks in unsanitary conditions" during the harvest, said Elena Urlayeva, head of the Alliance of Human Rights Defenders.

Others are crowded into schools, tents, or even farm buildings normally used to store fertilizer and agricultural equipment.

The Uzbek Employment and Labor Ministry says it is dispatching one nurse to monitor every 100 people who are "recruited" to pick cotton.

It says special medical examinations will also be set up for cotton pickers.

According to a global database maintained by Johns Hopkins University, Uzbekistan had confirmed nearly 50,000 coronavirus infections with 411 deaths as of September 17.

Those figures are believed by many observers to be grossly underreported.