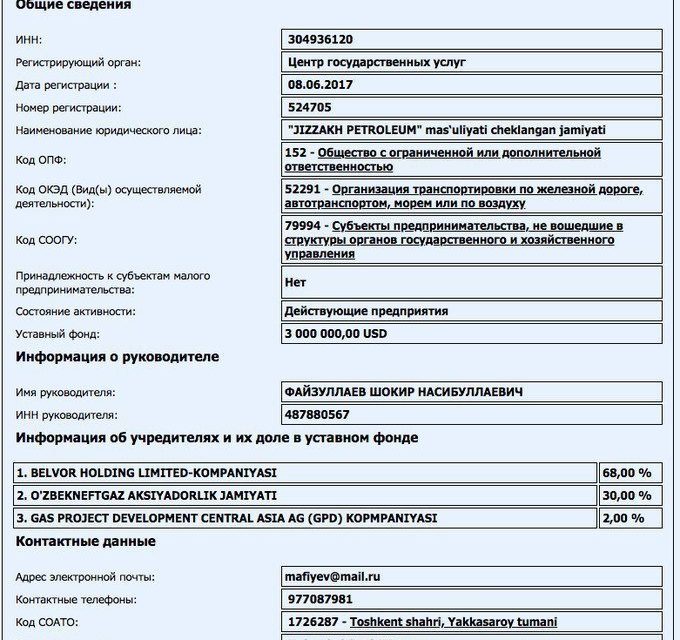 The Ferghana oil refinery is Uzbekistan’s largest – and most sought after.

Based in the most densely populated region of Uzbekistan in the Ferghana valley, the mammoth, Soviet-built complex churns out up to 6.5 million metric tons of oil and other petroleum products a year. Dozens of oil trucks are seen daily climbing the narrow Kamchik Pass that links the valley to the rest of Uzbekistan.

Known as the Ferghana NPZ, the refinery was once controlled by Akbarali Abdullaev, a relative of late Uzbek autocrat Islam Karimov, according to media reports and leaks. After Karimov’s death in 2016, Abdullaev, who also owned countless assets in the Ferghana valley, was charged with embezzling hundreds of millions of dollars and fled Uzbekistan.

Karimov’s former prime minister and successor, Shavkat Mirziyoyev, cracked down on Karimov’s kin and corrupt cronies and began sweeping reforms that spurred Uzbekistan’s once stagnant economy, signaling a perestroika of sorts in one of the world’s most autocratic and reclusive nations.

The NPZ was key to the economic reforms as 33 million Uzbeks face a perennial shortage of domestically-produced petroleum. Indonesian and Russian investors vied for control of the plant that was built in 1959 and needs hefty investments to retrofit or replace outdated equipment.

But in June, Jizzakh Petroleum, a company reportedly controlled by Russian natural gas monopolist Gazprom,took over the refinery for five years of trust management, according to Uzbek officials and media reports.

An expert on Central Asia claims that the sale of NPZ signifies the rise of Jizzakh Petroleum that already controls 70 percent of Uzbekistan’s oil fields. In an article published on Facebook, Alisher Ilkhamov, a London-based Central Asia expert with SOAS University, writes that the company is controlled by Uzneftegaz, a state-run hydrocarbon producer, and Gazprom, a Kremlin-controlled national gas monopoly.

Ilkhamov explains that the acquisition of NPZ is part of a broader and worrying trend – an invasion of Russian investors to Uzbekistan, some of them implicated in murky and corrupt deals, that followed Mirziyoyev’s steps to mend ties with Moscow.

“All of these super-profitable assets are sold to Russian companies without transparency and open tenders, most likely through personal connections,” Ilkhamov writes. “One can only guess what the motives of Mirziyoyev are who approves these deals. How much is he motivated by national interests?”

Mirziyoev “has practically become a director general of a holding named Uzbekistan Ltd, with a majority stake controlled from Moscow,” Ilkhamov concludes.

However, an Uzbek industry insider told us that the refinery is now allegedly controlled by Mirziyoyev’s inner circle and managed by Bakhriyor Fazylov, who owns a string of companies including the Eriell group that included a drilling company operating in Central Asia and Russia.

Fazylov appointed his cousin, Khabib Latipov, as the refinery’s director, the insider claims. Latipov is a former intelligence officer with the SNB, or the National Security Agency, the Uzbek successor of the Soviet KGB, which is notorious for rampant corruption.

A former math teacher, Latipov was fired from the SNB and appointed as head of Eriellneftegazservice, Fazylov’s oil and gas company. His tenure was not successful as he lacked professional and managerial skills to run an energy business, the insider claims.

“He had a cop mentality, was niggardly, used conflict as a tool to run the company, inciting discord and bullying among the staff and divisions of Eriellneftegazservice,” the insider told us. “Complaints and snitching were common and seen as the main management tools.”

As a result, the company lost three of its four branches in Russia. Latipov uses similar managerial methods at the Ferghana refinery.

“Conflicts, intrigues, personnel and salary cuts will spiral,” the insider said. “After five years of trust management, who will fill their pockets and offshore accounts?”

Media reports confirm some of these claims.

Radio Ozodlik, an Uzbek-language service of Radio Free Europe / Radio Liberty, reported in June that 287 staffers of the Ferghana refinery sent a group petition to Mirziyoyev’s online reception. Since Mirziyoyev’sascension to power, the reception has become an effective and often the only tool to complain about corruption among Uzbek officials.

In the petition, the staffers claimed that Jizzakh Petroleum took over the refinery in February, and the new management started work immediately.

After the petition was filed, the management interrogated each staffer who had signed it and fired some of them, Radio Ozodlik reported, although exactly how many is not known.

“They want to punish us because we don’t want to turn a blind eye to massive theft and dismissals”, a refinery staffer was quoted as saying.

The workers also claimed that NPZ’s new management is involved in the theft of gas. They claimed a fuel tanker with up to 30 tons of gas leaves the plant every day, Ozodlik reported.

Corruption has been rampant and endemic in Uzbekistan since the Soviet era. A mid-1980s investigation revealed colossal falsifications of cotton harvest figures and embezzlement of millions of rubles allocated by Moscow. The subsequent scandal led to the political rise of Islam Karimov.

However, during his rule the situation only deteriorated as strict government control over the economy bred corruption. Karimov’s elder daughter Gulnara created a sprawling business empire by taking over profitable businesses through coercion and pressure from government authorities.

Mirziyoyev made headlines in 2016 by announcing a string of reforms to reduce tax burden and boost business in Uzbekistan. He freed dozens of political prisoners from Uzbek jails notorious for their use of torture and made steps to mend ties with the West that were severed after Karimov expelled a US military base from the Afghan border in 2005.

The expulsion and a series of diplomatic spats followed the brutal crackdown on a popular uprising in the eastern city of Andijan that lies less than 100 kilometers from the NPZ. Government troops opened fire on thousands of mostly peaceful protesters killing hundreds.

Mirziyoyev’s reforms that were quickly dubbed “the Uzbek perestroika” have slowed down as he has sought closer ties with Russia. Observers and independent media claim that his family has wrested control of lucrative businesses that once belonged to Karimov’s clan.